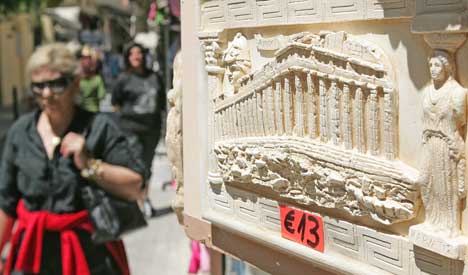 “The president and the chancellor fully share the same view and reaffirmed their determination to act quickly to implement the support plan as soon as a three-year programme will have been concluded with the Greek authorities,” said an Elysee statement.

Sarkozy spoke by phone with Merkel ahead of a meeting of his economic team at the Elysee palace to discuss the aid package being cobbled together by eurozone countries and the IMF to save Greece’s economy.

Finance ministers of the 16-nation eurozone are to meet Sunday to discuss the terms for the bailout expected to reach €45 billion this year alone, of which €30 billion will come from European countries.

The German and French parliaments are set to vote on loan packages next week, setting the wheels in motion for EU leaders to give the final go-ahead for the massive rescue at their summit on May 10.

In addition, France and Germany will “over the coming days take measures” to step up monitoring of eurozone financial markets and look at tighter regulation of rating agencies, said the Elysee statement.

Greece’s efforts to climb out of debt suffered a blow this week when Standard and Poors slashed Athens’ credit rating to junk status and also downgraded the ratings for Portugal and Spain.

The French National Assembly is expected to vote in the coming days on extending loans of up to €6.3 billion – of which €3.9 billion would be unlocked this year – to help Greece meet its debt refinancing obligations.

The two German federal houses of parliament could decide by Friday whether to allow Berlin to loan some €8.4 billion to Greece, according to leaders of Merkel’s party.