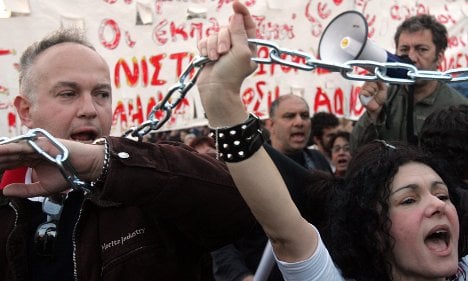 The warning came as a new poll showed nearly two-thirds of Germans were opposed to helping Greece, with a majority believing that membership of the EU brought more disadvantages than advantages.

Asked on MDR radio if Berlin would ever get its money back, Sinn, who heads the Ifo institute and is one of the top economic advisers to the government, said: “To tell you the truth, no.”

Greece “will not be in a position to carry out the necessary budgetary rigour” and will eventually have “to ask for Germany to waive the debt,” he said.

He warned that bailing out Greece could set a precedent for other euro area countries labouring under high debt and public deficits.

“It would be understandable if the Italians or the Spanish put pressure on us to pay up now because it is an important precedent for them,” said Sinn.

The survey, by the Allensbach Institute and published in the daily Frankfurter Allgemeine Zeitung, suggested that the German people shared Sinn’s

Three out of five people questioned said that a similar crisis to that raging in Greece could occur in another eurozone country, pointing in particular to Spain, Portugal, Italy and Ireland. The crisis is also affecting Germans’ view of the European Union.

According to the survey, only 20 percent of people think the EU has brought more advantages than disadvantages, with 28 percent believing the reverse.

Nevertheless, more than eight years since the euro first came into their pockets, the Germans, so reluctant to give up their beloved and strong Deutsche mark, are becoming more and more used to the currency.

The survey showed that 47 percent would rather have the mark back, down from 61 percent when euro notes and coins were introduced in 2002.

Sinn’s comments came ahead of a flurry of meetings in Germany about whether to contribute to a €30-billion ($40-billion) eurozone aid package, which is deeply unpopular in the country.

Chancellor Angela Merkel will hold talks with, among others, Dominique Strauss-Kahn, the head of the International Monetary Fund, which would also stump up billions.

Strauss-Kahn and European Central Bank chief, Jean-Claude Trichet, will also meet senior members of the German parliament to discuss the crisis in Greece, whose 10-year bond yield hit record highs Wednesday as the markets bet Athens will be forced to default on its debt.