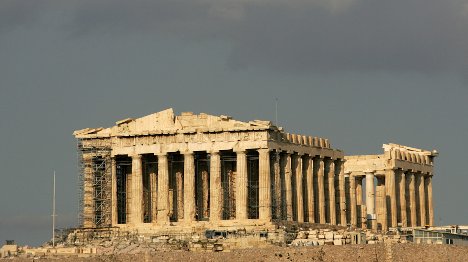 Only 33 percent are in favour, the poll by Dimap commissioned by Germany’s Die Welt daily and French television news channel France 24 showed. The survey

After months of fighting to finance its national debt, Greece formally applied on Friday for a bailout from its eurozone partners and the International Monetary Fund worth up to €45 billion ($60 billion).

But German Chancellor Angela Merkel, with a key state election to fight on May 9 and public opposition to a bailout strong, has insisted that Athens first demonstrate how it plans to get its public finances in order.

As Europe’s biggest economy, Germany would be the biggest contributor to any aid, providing around €8.4 billion in a €30-billion package from eurozone countries.

Influential voices in the media also took a sharp line in opposing a bailout for Greece, accusing the state of profligate spending and cooking the books.

Bild, the mass-circulation daily, carried the front-page headline: “Why

should we pay for Greeks’ luxury pensions?”

The Greek government “tricked, camouflaged and fooled for years in a way that would make the gods on Olympus blush … With all respect to the world’s oldest democracy, if you lie once, no one will believe you. Particularly when it’s about money.”

The paper sent its reporter to Athens in a stunt to hand out drachmas, Greece’s currency before it joined the euro in 2001. “The old notes were virtually ripped out of his hands,” Bild said.

Others attacked Merkel’s strategy of talking tough and then gradually relenting.

“Merkel drives the markets crazy,” said the Financial Times Deutschland, adding that her emergency statement on Monday where she sought to calm sentiment had fallen on deaf ears.

“The big bluff failed – the players blinked and sweated, wobbled and negotiated, and now the gamblers want to see the cards,” said the Tagesspiegel daily.