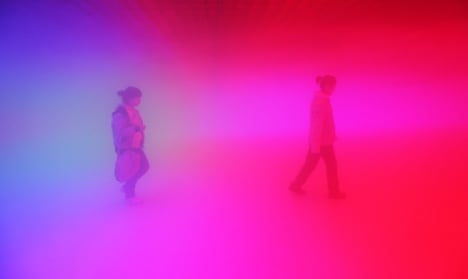 He wowed New York with huge man-made waterfalls, drew the masses to London’s Tate Modern with a giant artificial sun and is now staging his first major solo show in his adopted city, Berlin.

Eliasson, 43, is widely considered one of contemporary culture’s most ambitious creators, using ingenious tricks to offer urban dwellers a new perspective on the space in which they live.

The exhibition, Inner City Out, opens Wednesday at the German capital’s Martin Gropius Bau museum, next to one of the longest remnants of the Berlin Wall.

CLICK HERE FOR A PHOTO GALLERY OF THE EXHIBITION.

Using light, shadows, colour, fog, mirrors and the movements of the exhibition’s visitors to create their effects, the 19 installations explore Eliasson’s relationship with the city where he has lived and worked since 1994.

“I first came to Berlin shortly before the Wall fell” in 1989, Eliasson told reporters. When he returned, he said the city itself quickly became his muse.

“The unpredictability at the time was very inspiring. It became a place where I could establish myself with my work.”

Since then, he has become one of the hottest draws on the international museum circuit with major shows in Tokyo and London.

The 2003-2004 “Weather Project” at the Tate Modern’s cavernous Turbine Hall invited visitors to interact with each other in the shadow of the “half-sun,” with many banding together to create giant figures on the floor which were reflected in mirrors on the ceiling.

Two years ago, Eliasson built a spectacular open-air installation of huge waterfalls along the East River, which became a major draw for tourists and New Yorkers alike.

The German title of the Berlin show, Innen Stadt Aussen, is a play on words, meaning literally “Inside City Outside” but phonetically can be understood to mean “inside instead of outside.”

Museum director Joachim Sartorius called it “the most beautiful, most poetic exhibition” he was putting on this year. He declined to discuss the cost of the show, which was three years in the making, but called it “expensive.”

Access to the first room is gained via a recreation of a Berlin sidewalk with its distinctive granite slabs.

It leads to a series of rooms adorned with curvaceous, cracked mirrors, coloured projectors and sculpted mobiles that play with the light and the movement of visitors to great effect as they slowly rotate.

The show wraps up in a disorienting room full of fog, leaving visitors groping for the walls to orient themselves as only pastel-coloured lights mark off three sections of the opaque space.

Meanwhile beyond the museum walls, Eliasson has dispersed throughout the city large pieces of driftwood that washed onto the Icelandic coastline after epic journeys from Siberia and the Americas. Many of the logs have already been snapped up by collectors.

Born in Copenhagen to Icelandic parents, Eliasson was raised in Denmark and Iceland – he is a dual citizen – and divides his time between Berlin and his native city.

Asked about the possible artistic implications of the volcanic eruption that brought European air traffic to a halt this month, Eliasson described the phenomenon as “very, very beautiful.”

“It produces this unbelievable bass tone,” he said.

Inner City Out runs until August 9. Wednesday’s opening is free to the public.