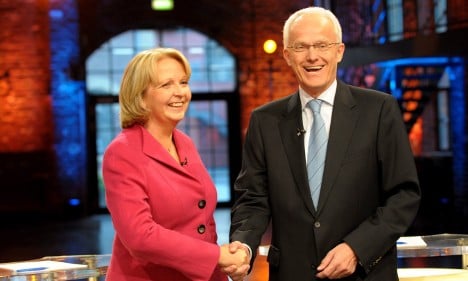 In the only live TV debate of the campaign – which will determine the balance in Germany’s the upper house of parliament the Bundesrat – both conservative Christian Democratic state premier Jürgen Rüttgers and his centre-left challenger Social Democrat Hannelore Kraft appeared docile and lacklustre.

Carried by broadcaster WDR, the debate centred on questions about a possible financial bailout for Greece, and the state’s education system.

While both candidates agreed that Germany should only help Greece under the strictest of conditions, they predictably squabbled over education.

Rüttgers defended the controversial Hauptschule track, which begins preparing students for vocational school at an early age. But Kraft insisted on instituting an Einheitschule system which allows students to all study together for longer before being funnelled into the different secondary schools, saying that the current system “pigeonholes” children.

“That will lead to a school war and I don’t want that,” said Rüttgers.

“A state premier is not for sale,” he said.

Both sides declared they had won the debate shortly afterwards, but the outcome of state election is up in the air.

Recent polls show that the current centre-right coalition of Christian Democrats and pro-business Free Democrats (FDP) – which mirrors that of the federal government – is no longer capable of winning a majority.

But a potential SPD coalition with the environmentalist Greens also appears likely to come up short. However, Kraft has been coy as to whether she would agree to govern with the support of the socialist Left party, which is aiming to enter the state legislature for the first time.

“They aren’t capable of governing or forming a coalition,” she said. “I will govern this state responsibly.”

The only certainty is that if voters don’t choose a CDU-FDP coalition for the state, then Angela Merkel’s conservatives and the FDP will also lose their majority in the Bundesrat, which would prove difficult for pushing her national agenda.