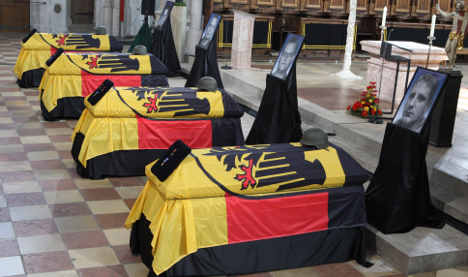 The Bundeswehr soldiers – aged 24, 32, 33 and 38 – were killed on April 15 in two different attacks in the northern Afghanistan province of Baghlan.

Their coffins were draped with German flags during the church service, held in Ingolstadt, Bavaria.

Walter Wakenhut, military general vicar, spoke of sorrow and shock, but also anger at the attacks.

The question of making sense from the deaths of the four men could not be avoided, he said.

But he said they would not have died in vain if the aim of a more just world had been brought a little closer.

Guttenberg said they had died in the knowledge that they were protecting the freedom and lives of all Germans – particularly in Afghanistan.

He also asked the men’s relatives for forgiveness, yet said the armed forces had to expect further casualties.

“After the engagement on April 15 and on Good Friday, what we perhaps did not want to accept for too long, has become clear – death and injury have become companions to our missions, and they will remain so in the coming years – probably not only in Afghanistan.”

But he said death and injury could not become routine.

German politicians often have difficulty justifying their part in the NATO mission in Afghanistan, particularly after a German-ordered air strike which killed many Afghan civilians last year.

Speaking last week after the attacks in which the four men were killed, Guttenberg said one could talk of the situation in Afghanistan as being war – but stressed this was not the official view.

He justified the operation there as being one to secure a region where destabilisation would have an enormous affect on large parts of the world.