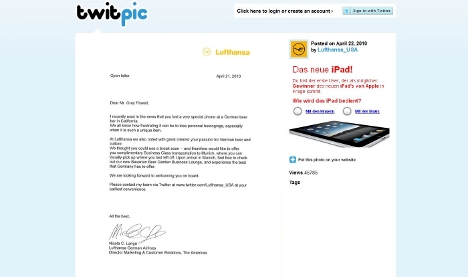 In an opportunistic marketing gambit, Germany’s biggest airline has offered Powell a free business class trip to Munich to “pick up where (he) last left off” by hitting the southern city’s famous beer halls and gardens.

In an open letter posted on Twitter, Nicola C. Lange, the airline’s director of marketing and customer relations for the Americas, suggested Powell he might need a break after the flurry of worldwide infamy he has earned from losing the next-generation iPhone.

Powell, a software engineer at Apple’s headquarters, lost his cutting-edge prototype in March. He’d been given the device to field test, but after celebrating his 27th birthday at the Gourmet Haus Staudt German pub in California, he left the phone on a bar stool.

It was picked up by another patron and found its way into the hands of internet technology magazine Gizmodo, which reported on its every detail – making a mockery of Apple’s tight product security.

“We all know how frustrating it can be to lose personal belongings, especially when it is such a unique item,” Lange wrote in the open letter.

“At Lufthansa we also noted with great interest your passion for German beer and culture. We thought you could use a break soon – and therefore would like to offer you complimentary business class transportation to Munich, where you can literally pick up where you last left off.

“Upon arrival in Munich, feel free to check out our new Bavarian Beer Garden Business Lounge, and experience the best that Germany has to offer.”

A spokesman for the airline in the US, Martin Riecken, confirmed the authenticity of the letter to The Local, but said they had so far had no response from Powell.

He said the airline was careful in its letter not to make fun of Powell’s predicament but added the offer had been made ”with a twinkle in the eye.”

Lufthansa’s publicity strategy may have something to do with its upcoming plan to relaunch broadband access on its trans-Atlantic flights.

PARTNER CONTENT
Why setting up a business overseas is easier than you think
Url copied to clipboard!