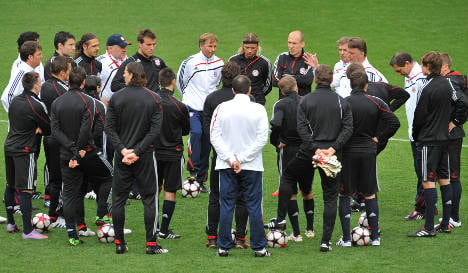 But despite being near full strength and thrashing Hannover 7-0 on Saturday in the Bundesliga, plus Lyon having to travel 750 kilometres by bus because of volcanic ash grounding most European flights, the Germans are still cautious.

“We shouldn’t underestimate Lyon, whatever we do,” Bayern chairman Karl-Heinz Rummenigge said. “This team saw off Liverpool in the group phase and Real Madrid in the last 16.”

Bayern’s French midfielder Franck Ribery, who coach Louis van Gaal is confident will play despite injury concerns, said his compatriots would be no walk in the park to beat.

“It will be very difficult against Lyon because they have a very good team. We shouldn’t allow ourselves to think about the final,” said Ribery, who has been linked to European giants Real Madrid and Barcelona this season.

Lyon are “very well organised, very aggressive and physically very strong,” van Gaal agreed. “They have players who are quick to counter-attack, all their players are strong dribblers. It’s always hard to play against teams like that.”

Bayern will also be without captain Mark van Bommel and defender Holger Badstuber, whose form this season has taken him to the verge of the Germany team, both suspended after picking up yellow cards.

The Bavarians’ win over Hannover leaves them top of the Bundesliga with three games left, and with the treble of German league, cup and Champions League titles in their sights. They last won the Champions League in 2001.

Robben, who says he is playing “the best football of my life,” has been dubbed “Bayern’s Messi” by Lyon daily Le Progres, in reference to Barcelona’s Lionel Messi, who take on Inter Milan in the other Champions League semi.

Lyon have problems of their own getting to Munich with cancelled flights across Europe due to Iceland’s volcanic ash cloud meaning the French had to endure a bus trip to Bavaria via Zurich.

“It’ll be a total of 10 hours on the bus, which is hard,” said Lyon captain Cris. “But there’s no choice and we have to accept it.”

Lyon drew 2-2 with Girondins Bordeaux on Saturday night in the third meeting between the clubs in the space of three weeks – they met in the Champions League last sixteen. The result effectively knocks both sides out of the Ligue 1 title race.

With five to play, Lyon are nine points off leaders Marseille.

Coach Claude Puel chose to start without top-scorer Lisandro Lopez, who only came on in the second period, but took a knock on the ankle and missed Sunday’s light workout.

Puel said the striker is “doubtful” for the clash in Munich with Lyon bidding to win their first Champions League title.

Centre-half Jean-Alain Boumsong has been out for two weeks with a calf strain, while Jean II Makoun (groin), Mathieu Bodmer (back) and Dejan Lovren (knee) were all absent in Bordeaux.

But midfielder Jeremy Toulalan says Lyon might be good for another surprise.

“Sometimes a team goes all the way even when no one thinks they will. Porto has done it before,” he said. “Maybe it’s our turn now.”