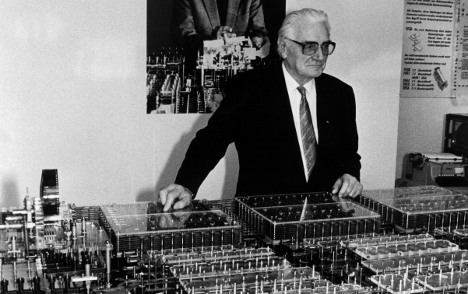 Six museums around the country, led by the German Museum of Technology (DTMB) are to celebrate the 100th year since Zuse’s birth and bring to light his largely forgotten contribution to the revolutionary invention of the 20th century.

“The computer didn’t come from America, and Bill Gates didn’t invent it,” said Dirk Böndel, director of the DTMB.

According to the DTMB’s research, Zuse who was born in 1910 and died in 1995, built the first programme-controlled digital computer in his Berlin living room in 1936. The computer, called Z1, was the size of a double bed. A replica now stands in the museum.

Zuse, an engineer by training, also devised in the 1940s the world’s first programming language using universal algorithms. Many mathematicians and information technology specialists now regard this creation as a work of genius, even though Zuse himself treated it as a light-hearted affair, claiming he was simply too lazy to count.

With his Z1 computer, Zuse was roughly a decade ahead of his time in the estimate of today’s IT specialists. Although Zuse received some financing from the Nazi regime, his work received little attention partly because Zuse deliberately did not seek a closeness to the Nazis, according to his son Horst.

Even after World War II, barely anyone in West Germany recognised the potential of Zuse’s creations. Even his own firm, Zuse KG, which Zuse founded in the Hessian city of Neukirchen, found little success.

The work simply didn’t bring enough money to cover the huge development costs. There were no development grants for such work at the time.

Meanwhile big firms caught up: IBM in the US and Siemens and Telefunken in Germany. In 1967, Zuse was forced to sell his debt-ridden company to Siemens. It didn’t make him rich, son Horst explained. Yet the basic idea of the Zuse discovery lies even today in every computer processor.

A scientific symposium on Zuse’s achievements is being held Tuesday and Wednesday in Berlin. Zuse exhibitions will also be held this year in Dresden, Paderborn, Hünfeld, Hoyerswerda and Kiel.