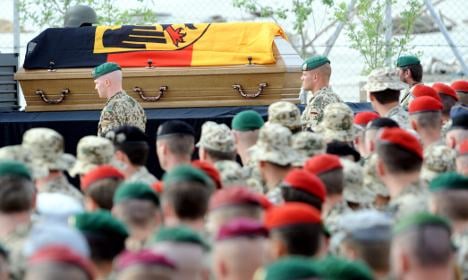 The speech to the Bundestag on Thursday would make it clear that the policy of fighting Taliban insurgents in Afghanistan remained firmly in place, Chancellery Chief of Staff Ronald Pofalla told broadcaster ZDF.

“The price is terrible,” he admitted, adding that the mission remained, as before, “exceedingly dangerous.”

The news came as the Office of the Federal Prosecutor announced it was winding up its investigation of the Kunduz airstrike that was ordered by a German commander and killed dozens of civilians.

The investigation of commander Georg Klein decided no breach of international or German law had taken place. The decision effectively gives greater certainty to German troops stationed in Afghanistan that they will not be pursued for war crimes.

Pofalla, meanwhile, said Merkel wanted to use the address to make clear “that we are still pursuing the policy of a ‘handover of responsibility’ and that we value tremendously the work of our soldiers.”

The government wanted to stay the course in its Afghanistan policy, despite public shock over the two recent attacks by Taliban fighters that have left seven German soldiers dead.

“We don’t intend to change that position,” he said.

Merkel made similar addresses to parliament following the German-ordered Kunduz air strike last September that killed dozens of civilians and ahead of the January Afghanistan conference in London.

Four Bundeswehr soldiers were killed and five seriously wounded last Thursday when Taliban fighters hit their armoured vehicle with a rocket launcher. Another three Germans were killed and eight injured on Good Friday when their convoy was ambushed.

The German troops stationed near Masar-i-Sharif in the northern province of Baghlan as part of the international ISAF force held a memorial on Sunday the remains of the four recently killed soldiers.

All four soldiers came from southern Germany, where there will be another service held on Friday. Defence Minister Karl-Theodor zu Guttenberg will attend the service.

At the Masar-i-Sharif memorial service, Bundeswehr Chief of Staff Volker Wieker and the commander of the German troops in Afghanistan, Brigadier Frank Leidenberger stressed that the soldiers would keep fighting.

“The fact remains: We won’t back down. We will fight on. And we will win,” said Leidenberger.

Wieker warned that it was part of the Taliban’s “strategic goal” to influence the debate in Germany about the Bundeswehr deployment.