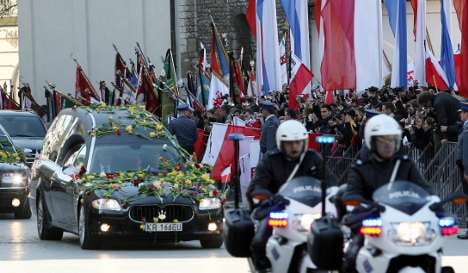 Merkel’s travel plans were ruined by the flight ban over most of Europe, which forced her to land in Portugal on her return from a trip to the USA. She then flew to Rome and has been making her way back to Germany by road for most of the weekend.

But German President Horst Köhler, Foreign Minister Guido Westerwelle and even 23 string musicians from the Berliner Philharmonic Orchestra as well as conductor Sir Simon Rattle managed to get to Krakow for the service.

They took helicopters from Berlin – along with their smaller instruments, while the larger ones such as double basses were sent to Poland on Friday in a minibus.

The musicians were due to play Richard Strauss’ Metamorphosen as a sign of solidarity with the Poles.

Thousands gathered in Krakow over the weekend to pay their respects to their dead president and his wife who will be buried in the Wawel cathedral next to Polish national heroes.

The decision to bury them there is a controversial one, with some suggesting that the honour is undeserved.

US President Barack Obama could not make it to the funeral due to the flight ban, which also prevented the arrival of French President Nicolas Sarkozy, Austrian President Heinz Fischer, EU Commission President Jose Manuel Barroso and President of the European Council Herman Van Rompuy.

Russia’s president Dmitri Medvedev made it to the funeral.

Kaczynski, his wife and more than 90 others died last week when a plane taking them to a commemoration of the 70th anniversary of the Katyn massacre – when the Soviet secret services killed 22,000 Polish officers – crashed in Russia.