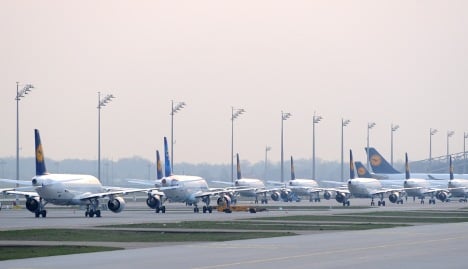 They and Defence Minister Karl-Theodor zu Guttenberg, who had been visiting troops in Afghanistan, were diverted to Turkey after leaving Mazar-i-Sharif on Friday.

An army spokesman said the soldiers, who were all in a stable condition, were being cared for in a hospital in Istanbul. Four of their colleagues were killed during a fire fight on Thursday.

Chancellor Angela Merkel was also inconvenienced, with her return flight from the USA forced to stop in Lisbon on Friday. On Saturday morning she is said to have been on the way to Rome, where she and her delegation were set to take cars or busses to get home.

She is due in Krakow on Sunday for the funeral of president Lech Kaczynski and his wife Maria who were killed in a plane crash last week. A chancellery spokesman said that plan still stood.

While the closure of airspace was on Saturday only officially extended until the evening, the association of German airports said that ensuing problems would take days to clear.

“It will take a few days until we can get back to regular service,” said Ralph Beisel, from the association.

He said he was in talks with regional authorities about the possibility of relaxing rules limiting start and landing times so that people waiting to travel could be served as soon as possible.

The cancellation of nearly all European flights has put pressure on alternative forms of transport, with Deutsche Bahn putting on additional trains to cope with increased demand.

“Everything that can roll is rolling,” a spokesman said. He said the connections between Frankfurt, Munich, Hamburg, Dusseldorf and Berlin were expected to be particularly busy.

The cloud of ash which has caused the problems could continue for days according to geologist Michael Bröcker from the University of Münster.

“One absolutely cannot make any kind of serious prognosis,” he said. “The outbreak could be over in a few days but it could also continue.”

He said the cause was the mixing of lava and water. “This contact turns the water explosively into steam and large amounts of lava are smashed into pieces smaller than two millimetres. These particles are known as volcanic ash,” he explained.

The World Health Organisation (WHO) has warned that people with breathing difficulties could suffer health problems as a result of the ash cloud.

Tiny particles less than ten micrometres big can in particular cause problems if they are inhaled by people with asthma, bronchitis or emphysema, said a spokeswoman.

“If one is outside and feels something in the throat or lungs – gets a runny nose or itchy eyes, one should go inside and limit outside activities,” she said.