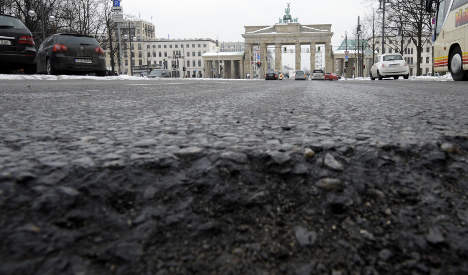 Fill the potholes with something. Photo: DPA

German Finance Minister Wolfgang Schäuble offered the town and community councils the loophole in a paper which suggested they tap into federal money set aside to promote economic growth in the light of the recent financial crisis.

The repairs must lead to, “a result of a tangible reduction of street noise,” says the paper, according to Der Spiegel magazine on Saturday.

This would free up funds to repair the roads, which were seriously damaged by frost during the long winter, from federal funds because noise reduction is a federal responsibility, while repairing roads lies with local government.

But most of the €10 billion economic revival fund has already been allocated or spent, according to Rainer Timmermann, president of the Lower Saxony towns and communities association.

He said local councils had already spent their share of the money on non-essential causes, as was prescribed when the fund was established.

In a different approach to traffic management, the Greens have suggested allowing German cities to impose a charge to motorists to drive into the city centres.

Winfried Hermann, chairman of the parliamentary committee on traffic, told the Rheinpfalz am Sonntag newspaper he wanted to enable cities to be able to charge motorists a toll like London and Stockholm.

He said the charges, which he envisioned being between €5 and €10, would give motorists a good reason to leave their cars at home and use public transport. Cars which were full of people would be able to enter for free he said.

He said cities such as Berlin, Hamburg, Munich, Cologne and Stuttgart could introduce the toll once a federal law enabled them to. Urban areas such as the Ruhr could introduce a joint charge.

Such a toll would reduce the commuter traffic and improve quality of life in the city centres, he said.