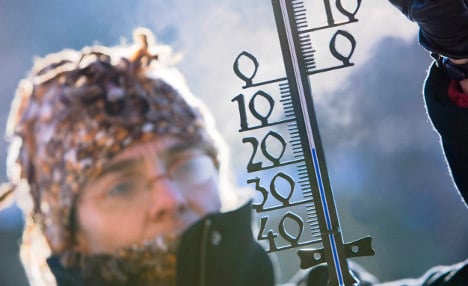 The study in “Environmental Research Letters” compared recent low sun spot activity to a solar period called the “Maunder minimum” in the second half of the 17th century, when even the Thames River froze over in London. The period of harsh winters is frequently called “The Little Ice Age.”

In the last 11 years, sun spot activity has been at a 90-year low, providing the researchers from the University of Reading, the Rutherford Appleton Laboratory in Oxfordshire, and the Max Planck Institute for Solar System Research in Katlenburg-Lindau with a special opportunity to compare historic temperature records with sun activity and investigate how this connects to cold winters in the region.

Their work showed that periods of quieter sun activity influenced atmospheric conditions, creating a “blocking” effect against warm Atlantic air that would normally reach the region, resulting in colder winters.

The meteorological changes affect the jet stream above the region, rerouting the usual mild westerly winds and allowing cold and dry wind to gust over Europe – adding to an overall lower temperature.

The study said that conditions even suggest an eight percent chance that a chilly Maunder minimum-like era could occur once again.

But the scientists insisted that their findings did not disprove the theory of climate change.

“We stress that this is a regional and seasonal effect relating to European winters and not a global effect,” the study said, adding that “results presented here indicate that, despite hemispheric warming, the UK and Europe could experience more cold winters than during recent decades.”

To reach this conclusion, the UK researchers incorporated data from the Central England temperature (CET) record, which dates back 351 years, with sun activity data put together by the Max Planck specialists.

Director the Institute for Solar System Research there Sami K. Solanki said he used magnetic field measurements to measure sun activity, but because these records date back to just 1900, researchers reconstructed older levels with the help of computer simulations.

“The connection between sun activity and the cold winter in Europe was only recognisable after we calculated out the overlaying trend of global warming,” Solanki said in a statement.