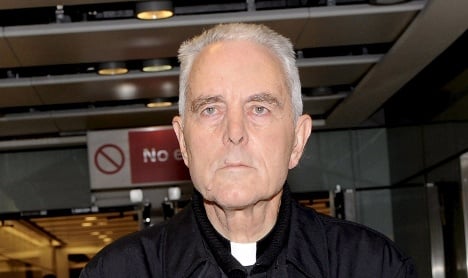 “He will not be there,” lawyer Matthias Lossman said. “I will explain to the trial why he is not coming.”

The bishop, a member of the breakaway Catholic ultra-conservative Saint Pius X Society, said in a television interview recorded in Germany in 2009 that “200,000 to 300,000 Jews perished in Nazi concentration camps, but none of them by gas chambers.”

“It was all lies, lies, lies,” he said in the interview, aired later on Swedish television, and “not one Jew” was killed in the Nazi gas chambers.

Williamson was fined €12,000 earlier this year by a court in the southern city of Regensburg, near where he made the comments.

But a further trial was ordered after he refused to pay up, although the court does not require the bishop to be present.

The outburst prompted a very rare comment on religious matters by German Chancellor Angela Merkel, who called on Pope Benedict XVI to “clarify unambiguously that there can be no denial” the Nazis killed six million Jews.

The scandal carried particular resonance in Germany, where the Nazis masterminded and carried out the murders during World War II, and because Pope Benedict is German.

Benedict also drew strong criticism for overturning the excommunication of Williamson and three other bishops in the Saint Pius X Society.

Denying that the Holocaust took place, or questioning key elements, is illegal in Germany and Austria.