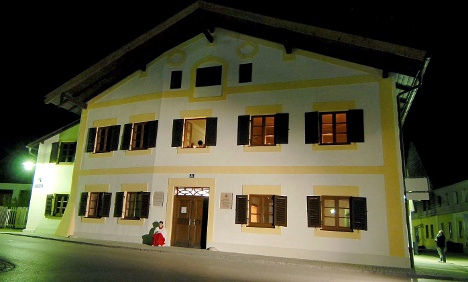 A police spokesperson said the words daubed on the house were of “insulting content,” adding that they referred to the child abuse affair that has rocked the Church in Germany in recent months.

Police refused to reveal the exact words painted on the building in blue, which a passerby noticed on Tuesday morning. The words were quickly covered over.

Pope Benedict was born as Joseph Ratzinger on April 16, 1927 in the small community in Upper Bavaria. Tuesday’s incident is the second time his place of birth has been vandalised. During a visit to Bavaria in September 2006 two balloons of blue paint were thrown at the house.

In July 2007 a bust of the pope outside the Traunstein parish church – where he conducted his first mass in 1951 – was covered in red paint.

Germany’s Catholic Church has been embroiled in a crisis over recent weeks as victims of widespread sexual and physical abuse continue to come forward. Most cases date back by several years, a fact that has politicians debating a possible extension to the statute of limitations on such crimes.

Similar accusations have also surfaced in the Netherlands, Austria and Switzerland, while Ireland has been rocked by revelations about cover-up efforts by the head of the Church there in the 1970s.

Meanwhile the pope himself has been drawn into the scandal. In late March the Vatican dismissed fresh allegations that he failed to bar the transfer of a known paedophile priest while he was the archbishop of Munich.

The case followed another accusation according to which Ratzinger failed to act over an American priest accused of molesting up to 200 deaf children between 1950 and 1974.