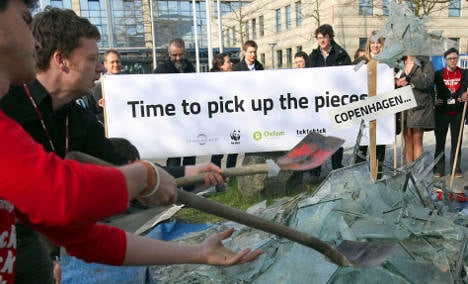 It was cast as a chance to revamp the UN arena on climate change, to rebuild trust and foment new thinking after the backbiting and sterility of the Copenhagen Summit last December.

Instead, three days of talks in Bonn, Germany under the UN Framework Convention on Climate Change (UNFCCC) at times resembled the movie “Groundhog Day,” where a grumpy sceptic is doomed to live the same events over and over again.

Almost as if the shock of Copenhagen had never happened, delegates squabbled afresh over the minutiae of the UNFCCC’s work schedule, over which bits of draft text to use as a blueprint for negotiation and the fate of a document widely dismissed as a threadbare compromise.

“Old habits die hard,” Greenpeace observed acidly. “Too many of the negotiators present chose to focus on divergence and problems.”

“There’s still strong disagreements about how to move this process forward… to demonstrate that the UNFCCC can deliver in the end, because there is a lot of debate in the public about that right now,” admitted EU negotiator Artur Runge-Metzer.

Developing nations barely masked their mistrust of rich countries, which many suspected of seeking to ditch the carbon-curbing Kyoto Protocol after 2012 and replace the benchmark treaty with a wishy-washy voluntary deal.

The United States and other rich countries, for their part, at times struggled to hold back exasperation at a consensus-driven negotiation format that, in their view, had dangerously slowed progress.

“Some delegates don’t seem to have taken onboard what happened in Copenhagen and the need to swiftly gain concrete results,” said French chief negotiator Paul Watkinson.

They lobbied for Copenhagen’s one semi-success – a brief document cobbled together by a couple of dozen leaders to stave off a disaster – to be given life rather than cast into limbo.

Copenhagen was supposed to be the glittering culmination of a two-year haggle among 194 countries.

It was to have opened the way to a landmark treaty for reducing greenhouse gases and priming a financial pump that ultimately will provide hundreds of billions of dollars to climate-vulnerable poor countries.

But the touted triumph was transformed into a near fiasco, redeemed only by the frantic drafting of the so-called Copenhagen Accord.

It sets a tentative goal of limiting warming to two degrees Celsius (3.6 degrees Fahrenheit), opens up a roster of pledges to reduce greenhouse gases and earmarks some $30 billion in short-term aid to poor, vulnerable countries.

Enthusiastically endorsed by the United States, bitterly attacked by left-led countries in the Caribbean and Latin America and privately disowned or quietly sidelined by many other countries, the document has an uncertain future after Bonn.

The latest talks at least showed unity in one area: the realisation that dealing with climate change is going to be a grinding and very long-winded business indeed.

No one is holding out any guarantee that the post-2012 pact will be wrapped up at the next annual UNFCCC conference, running in Cancun, Mexico, from November 29 to December 10.

A better chance lies with the 2011 get-together in South Africa, but only after patient and cautious progress, said UNFCCC Executive Secretary Yvo de Boer, who himself has quit to pursue a career in the private sector.

“It is important to bear in mind that this quest to address climate change is a long journey, that generally achieving perfection takes practice, that the scientific community is telling us we need to achieve huge emissions reductions by the end of the century,” he said.

Overladen, fiendishly complex and apparently unreformable, the UNFCCC road show will crawl on, but there is now a growing interest in smaller, nimbler fora, gathering major emitters, donors or key countries fighting carbon emissions from deforestation.

“We will continue to take advantage of venues that promote candid and constructive dialogue,” said US negotiator Jonathan Pershing, carefully stressing that the work would only be “complementing” the UNFCCC process. There is still momentum in the UN process, but it is fragmenting,” commented Annie Petsonk of the US green group, Environmental Defense Fund (EDF).