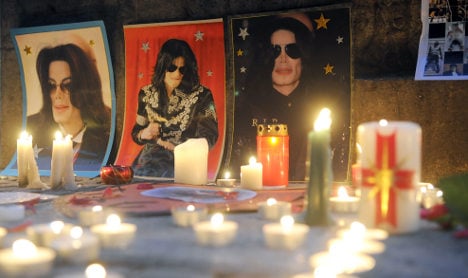 Since the US singer died suddenly in June 2009, fans in the Bavarian capital have set up a makeshift pilgrimage site at the base of a statue honouring the Franco-Flemish Renaissance composer Orlande de Lassus on Promenadeplatz.

They picked the location because the self-appointed King of Pop once stayed in the luxury hotel Bayerischer Hof across the street. But the Süddeutsche Zeitung reported this week that the spontaneous outpouring of grief has sparked a bitter row with Munich residents less enamoured with Jackson.

The candles, hand-written posters and pictures adorning the de Lassus statue have apparently become an eyesore to some, leading them to strew bird feed around the impromptu memorial. The paper said pigeons descend upon it, overturning fan offerings and soiling expressions of eternal devotion to Jackson.

The sabotage distresses Jackson fan Sandra Mazur, but it also encourages her to continue with her campaign for a permanent memorial dedicated to the singer in Munich.

“We’re grateful for the current memorial, but we want our own monument, a statute that will stand for the next 100 years,” she told Süddeutsche Zeitung.

Mazur estimates that a life-sized bronze statue with Jackson in one of his signature poses – either standing on his toes with hat in hand or doing the moonwalk – will cost around €70,000. Collecting donations in her spare time, she said the fans would gladly give the statue to the city for free. But that’s the problem – Munich officials don’t seem particularly keen on having a memorial to the King of Pop.

“Munich has a bad case of monument-itis,” city councilman Reinhard Bauer told the paper. “Nothing has been decided for good, but there will not be further monuments on Promenadeplatz.”

But Mazur said the Jackson fan community will continue coming to the square until they have a permanent place to remember him. Their petition already has over 1,000 signatures and they intend to deliver it personally to Munich Mayor Christian Ude.

“We knew from the start it wouldn’t be easy,” Mazur said.

And unless the city suddenly gets behind the initiative, it appears as if Orlande de Lassus – one of the world’s most popular musicians nearly 500 years ago – will have to continue to share his memorial with his modern counterpart and the saboteur pigeons.