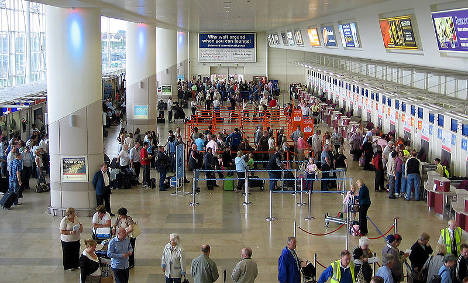 On Saturday morning, airport authorities alerted police to the death of a 91-year-man in one of the terminals.

In a scene reminiscent of the 1989 US film “Weekend at Bernie’s,” the two women had put sunglasses on the corpse and placed him in wheelchair, allegedly trying to trick airport employees and get him on a flight run by low-cost airline EasyJet, UK media reports said.

“Two women aged 41 and 66 were arrested on suspicion of failing to give notification of death. They have been released on bail until 1 June 2010,” a police statement said, adding that investigation continues and a coroner’s report is pending.

The duo is believed to be originally from Germany, though they now live in Oldham, from where they reportedly took a taxi with the body to the airport.

The pensioner is thought to have died the previous day, but the taxi driver did not notice anything suspicious. He was “upset and devastated” to hear the news, UK paper The Daily Mail reported.

A police source told The Local that German officials were not yet involved in the investigation or repatriation of the body.