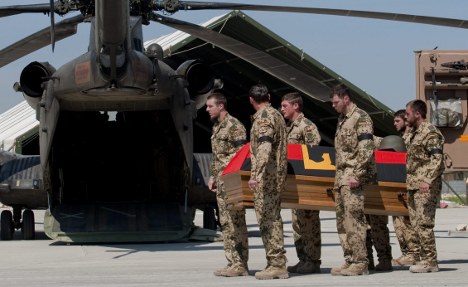 His comments came as it emerged that Germany’s embassy in the Iraqi capital Baghdad had been hit by a bomb attack, though it appeared not to have been the primary target.

After three Bundeswehr soldiers were killed in a fierce Taliban ambush and German soldiers killed six Afghan allies in a “friendly fire” incident, Guttenberg said it was time to stop playing with language.

Such “empty words” as “non-international armed conflict” and similar expressions diminished the seriousness of the situation, he said.

German politicians, notably Guttenberg’s predecessor Franz Josef Jung, have long been at pains to avoid the W-word to describe Germany’s involvement in Afghanistan, which remains broadly unpopular at home.

Guttenberg was spurred to make his remarks by the bloodshed of Good Friday, when three German soldiers were killed after their minesweeping convoy was ambushed by at least 100 Taliban insurgents.

Guttenberg also promised a full investigation into the friendly fire incident and vowed, “We will stay in Afghanistan.”

His comments to journalists in Bonn came as it emerged a bomb attack in Baghdad had killed one Iraqi security guard and injured three others at the German embassy, though the primary targets appeared to have been the nearby Syrian and Egyptian embassies.

Also on Sunday, a former army chief accused the government of failing its troops in Afghanistan.

Harald Kujat, who was the Bundeswehr’s Chief of Staff from 2000 to 2002, blasted the government for having learnt nothing from the Kunduz air strike about reconnaissance and communication systems.

There was a “lack of understanding about conditions on the ground and ignorance about the needs of the combat forces,” he told Welt am Sonntag newspaper.

“Our soldiers are in this situation only because they – as so often – were not equipped with the necessary modern reconnaissance systems,” he said of the accidental killing of the six Afghans in Friday’s ”friendly fire” incident.

“The Taliban know the terrain; they have the advantage. You have to somehow compensate for that.”

In the friendly fire incident, there has since been dispute about whether the vehicles were marked as military or civilian. ISAF commander, US General Stanley McChrystal, visited the German Kunduz base on Saturday in a clear demonstration that he took the friendly fire incident very seriously. Afghan authorities has criticised the German military, and a full investigation has been promised.

To better understand the methods of the enemy, the Bundeswehr needed a more effective information and command system for combat, Kujat said. The essential components of this were already available – “only the ministerial bureaucracy is doing nothing,” he said.

He also branded the recent troop boost passed by the Bundestag as a “coalition compromise” that did not meet the strategic needs of the mission.

He predicted further bloodshed for the German army in northern Afghanistan, saying the air strike of last September had sapped their strength but they were now poised for a renewed assault.

“After that, they needed a certain time to set the scene. And now they’re doing just that.”

The dead Bundeswehr soldiers, aged between 25 and 35, were from a paratrooper regiment from Lower Saxony.

“We all hoped that we would never have to experience these days,” said the ISAF commander for northern Afghanistan, Brigadier Frank Leidenberger at a memorial service on Saturday. “The hope was suddenly shattered on April 2.”

Leidenberger also offered sympathy for the deaths of the Afghan soldiers and confirmed for the first time that it was six soldiers killed, not five as the Bundeswehr had initially stated.

Developoment Minister Dirk Niebel, who extended his trip in Afghanistan to visit the troops in Kunduz, called for Germany as a whole to show greater support to its soldiers. After talking with the troops on Saturday, he told Bild am Sonntag newspaper Friday’s gun battle showed how deadly the situation was for German troops.

”They want more understanding that they sometimes, even preventatively, have to defend themselves. And they don’t understand it when they have to justify themselves for this to the German public or even be pursued for prosecution.”

The soldiers at the Kunduz base were due on Sunday to farewell the bodies of their comrades killed on Friday in the fiercest gun battle yet seen between Germans and Taliban insurgents. The three soldiers’ remains were to flown back to Germany on the Airbus that Niebel had been using to visit civil reconstruction projects in the area.

The four seriously wounded German soldiers were flown to Germany on Saturday. They landed at the Cologne-Bonn airport and were transferred immediately to a military hospital at Koblenz.