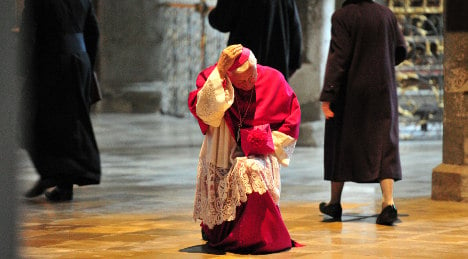 In an interview with Welt am Sonntag newspaper, previewed Saturday, Mixa added that he would pray for his accusers, who now number at least eight, all of whom claim he beat or hit them at a children’s home in the 1970s and 1980s.

Mixa has vehemently denied the accusations.

Bishop Mixa, who had previously claimed the sexual revolution was partly to blame for child abuse in the Church, has been accused of hitting children at the St Josef children’s home in Schrobenhausen, north of Munich, in the 1970s and 1980s.

One alleged victim told daily Süddeutsche Zeitung: ”He punched me with full force in the face.”

He is now Bishop of the nearby city of Augsburg.

Mixa renewed his offer to meet and speak with his accusers, telling Bild am Sonntag in a separate interview that he wanted “to learn what befell them.”

He said he planned to pray for them because, as a pastor, his concern was that they were the victims of some injustice.

Mixa said he had taught thousands of children and adolescents over the years. “My credo has applied and applies up to today: ‘I’ll be good to you. Please be good to me.”

Meanwhile, a 40-year-old man from the Rosenheim area has told the Ingolstadt Donaukurier newspaper in Bavaria that he too had been abused by Mixa as a student.

“Mixa was not nice,” he told the paper. “He pulled us by the hair and by the ears.”

The man added Mixa had been very different from the way he portrays himself in the media.

Another man, now living in Innsbruck in Austria, said Mixa had hit him after he had tried to run away from the home and been returned by the police.