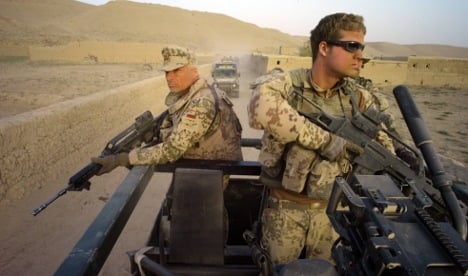 The incident happened immediately on the heels of a Taliban attack on a Bundeswehr patrol that left three Germans dead and eight wounded – an attack German politicians have condemned as “underhanded.”

An army spokesman at the Military Command Centre in Potsdam said the Bundeswehr deeply regretted the friendly fire incident.

The spokesman said incident happened in the Kunduz region on Friday evening local time, as a group of German soldiers made their way from the field camp to relieve the troops involved in the earlier gun battle.

A pair of non-military vehicles approached German soldiers and, when they failed to stop for inspection, a German armoured military vehicle opened fire.

Earlier Friday, three German soldiers were killed and eight were injured – four seriously – when the Taliban ambushed a patrol in the worst firefight the Bundeswehr has seen in its nearly eight years in the war-torn country.

According to Brigadier Frank Leidenberger, the commander of the international ISAF forces in northern Afghanistan, the patrol was attacked by about 100 Taliban insurgents as it removed mines planted in the road in the dangerous district of Chahar Dara, near the Bundeswehr’s Kunduz base.

Other reports said up to 200 Taliban fighters had been involved in the ambush and had used rocket-propelled grenades among other weapons.

The attack happened about 11.30am German time, and the subsequent gun battle raged for eight hours, according to an army spokesman. During this time, a German armoured vehicle hit a mine.

The deaths of the German soldiers bring to 39 the total number of Germans killed since the beginning of the Afghanistan war in 2002. They have caused shock and dismay in Germany.

“It is with great dismay that I have heard of the abominable and underhanded attack on our soldiers in Afghanistan,” she said.

Defence Minister Karl-Theodor zu Guttenberg interrupted his Easter holiday in South Africa to issue a statement saying: “My thoughts and prayers go to the families. In the face of combat on such a scale, it is clear how dangerous the nonetheless necessary mission in Afghanistan is.”

Foreign Minister Guido Westerwelle expressed his sympathy to the families of the dead German soldiers.

“I condemn this malicious attack, which was not directed only at the German soldiers but against the entire Afghan people. In these difficult moments, our thoughts are with the families and relatives of the victims. Our most heartfelt sympathy goes to them.”

The socialist Left Party reiterated its call for an immediate German withdrawal from Afghanistan.