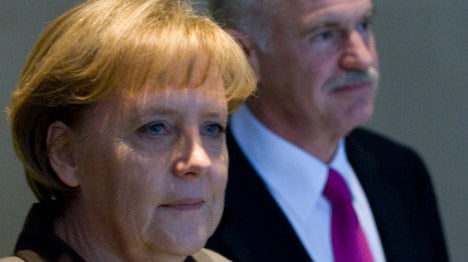 “We have struggled for years to build a strong Europe, economically stable and with social solidarity,” Papandreou said at a meeting of the national council of his socialist PASOK party.

But “many forces forget the political importance of the euro, and are withdrawing the substance of the political vision of the European project, which is a joint effort to develop our economy in a calm and stable climate,” he added.

“In the end this could destablise the EU, lead it in the opposite direction to that of those who inspired and created a united Europe and its common currency,” warned the prime minister.

Papandreou’s comments came a day after a German official indicated that Berlin was open to the possibility of the International Monetary Fund helping Greece, throwing into doubt a plan for the other 15 countries which use the euro to help Athens meet its borrowing needs.

After taking office last year Papandreou’s government revealed the country’s finances were in a much worse state than had been publicly disclosed, forcing it to make painful spending cuts and tax hikes to fix its public finances – triggering strikes and violent protests on the streets of

This has raised concerns whether investors will buy the Greek government’s bonds, and at what price, as Athens must roll over this year some €50 billion of its more than €300 billion in debt.

“Greece will not default” and it has “the capacity to get the country out of the current crisis,” Papandreou told party leaders.

“The European Union has the means (to put in place) rapid and co-ordinated assistance,” the European Union’s financial affairs chief Olli Rehn told the Welt am Sonntag newspaper.

“The European Commission is ready to make a concrete proposal in this sense. The financial aid could come into effect quickly but would be linked to drastic obligations” on Greece, he added.

EU Commission President Jose Manuel Barroso on Friday urged member states to approve the creation of a financial aid mechanism for Greece to use if necessary.

Barroso was making an thinly veiled appeal to German Chancellor Angela Merkel, who has been reticent to offer help, to approve a mechanism for offering aid to Athens when the 27 heads of state and government meet in Brussels next Thursday and Friday.

The help Barroso has in mind would be “a system of coordinated bilateral loans,” and as such would be compatible with EU law which bans bailout loans to any of the 16 nations, including Greece, that use the euro currency.

“For EU aid to Greece, there is no collective instrument. In case of extreme necessity there could be coordinated bilateral aid on a voluntary basis,” Schäuble told Bild am Sonntag weekly in comments to be published on Sunday.

Schäuble did not indicate if Germany would be willing to help Greece bilaterally or if it would merely not try to stand in the way of other EU nations providing aid.