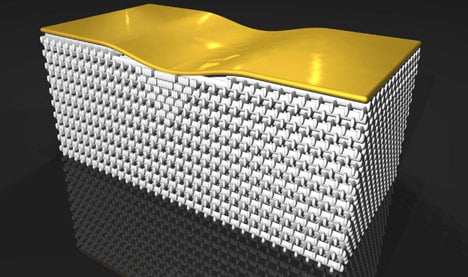 An illustration showing the cloaking device hiding a bump in gold. Photo:Science

Following a year-long collaboration, researchers from the Karlsruhe Institute of Technology succeeded in concealing a bump on a thin gold reflector.

The object used in the study was quite small, measuring just one thousandth of a millimetre. “Nevertheless, the results are a huge step forward,” said Martin Wegener, a nanostructure expert involved in the research.

The team’s work was published in the latest issue of leading research journal Science and was a collaboration between KIT and the Imperial College London.

Until now, experiments with cloaking technology have only worked on a two-dimensional level. Whereas previous research involved light wavelengths outside the optical range, the Karlsruhe team used infrared waves, which are closer to visible light

“We can now hide a three-dimensional object by placing it under a “carpet mirror,” and making the resulting bump disappear,” said Nicolas Stenger, co-author of the study. The teams’ cloaking device causes the mirror to appear flat.

Developing the small-scale invisibility cloak was a complicated process. “The mathematical tools used for the calculations were similar to those of Einstein’s theory of relativity,” Stenger said.

The new cloaking technology could one day help researchers develop metamaterials equipped to obscure larger objects, or even human beings.

“But the production would take an extremely long time,” Wegener said.