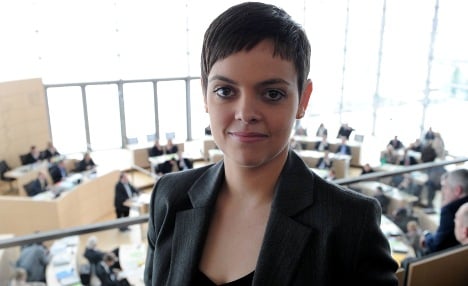 “If I hadn’t gone public in February I still wouldn’t have an answer,” the 31-year-old said, three days after the naturalisation office informed her she would receive her citizenship in April.

Menger-Hamilton, who works as the press spokesperson for the Left party’s Schleswig-Holstein parliamentary group, inadvertently became an enemy of the state when she applied for citizenship in Lower Saxony in October 2007.

Born in Germany to a Scottish father and an Italian mother, the resident of Laatzen, near Hannover, said that while she feels “completely European” and connected to all three countries, Germany is her home.

She said her main reason for wanting citizenship was to avoid unnecessary bureaucratic inconveniences when marrying a German man.

But it turned out that the naturalisation application she submitted in Hannover was only the beginning of her paperwork problems. Standard processing time for a request is between three and six months, but after nine months with no word, Menger-Hamilton began wondering what was holding things up.

“Only after several inquiries did an official reveal that someone from the domestic intelligence agency (Verfassungsschutz) had gotten involved in my case,” she told The Local.

When she went to the Hannover naturalisation office to view her files, Menger-Hamilton was stunned to find that the state Interior Ministry – led by conservative Christian Democrat Uwe Schünemann – had also given orders to block her application.

Documents show that the state interior minister himself was involved, she said.

Schünemann told news magazine Der Spiegel this week that he played no role in Menger-Hamilton’s case, saying he was only informed of its existence and blaming Hannover authorities for the delays.

But a statement from the Hannover district office on Wednesday pushed back, outlining a chronology of at least eight occasions on which Germany’s domestic intelligence agency, which reports to the Interior Ministry, intervened in the process.

“The Interior Ministry engaged in this procedure several times and made it clear that naturalisation should be denied,” Hannover’s district president Hauke Jagau said.

The documentation details statements from the Verfassungsschutz, which specifically cited Menger-Hamilton’s Left party affiliation as problematic because the organisation – though it is legal and the country’s fourth largest political party – was “against free democratic order.”

“The political components of this situation are problematic,” Menger-Hamilton told The Local. “That a ministry can harass an individual for political ends is a scandal. There were no accusations; everything was construed with the aim of defaming the Left party.”

Despite media criticism, Schünemann said he will continue to monitor the Left party’s activities in the “defence of democracy,” Der Spiegel reported, citing a similar case in the state involving a young Syrian man.

Menger-Hamilton told The Local that while she may act against having a file with the domestic intelligence agency, she does not plan to take legal action against the Interior Ministry for blocking her application, and is simply relieved that the struggle is over.

“It’s hard for me to just spontaneously be happy about it,” she said. “It’s hard because it was such a difficult fight.”