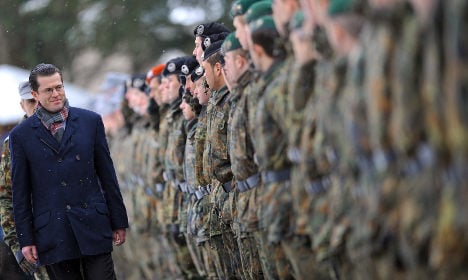 The centre-right government coalition had agreed to reduce the conscription period from nine to six months in early 2011, but broadcaster ARD reported that Guttenberg would bring the move forward to October 1.

The defence minister also plans to increase the number of new recruits each year from 40,000 to 50,000.

But outgoing parliamentary commissioner for the Bundeswehr, Reinhold Robbe, slammed Guttenberg’s plan in an interview with daily Kölner Stadt-Anzeiger.

“Among the troops the reduction is seen with overwhelming scepticism, because there they can’t yet see what direction this is going,” he told the paper, adding that the military had to guarantee that recruits still understand the meaning of their service.

Meanwhile Robbe said there was a growing demographic problem when it came to recruitment.

“The quality of the applicants is going down,” he said.

The alternative to Bundeswehr service, compulsory community service, or Zivildienst, would also be shortened but the government is considering allowing voluntary extensions, as many community groups believe six months would not be long enough to make the service worthwhile.

However the government would have to approve additional funding to support people’s service if they choose to work longer than six months.