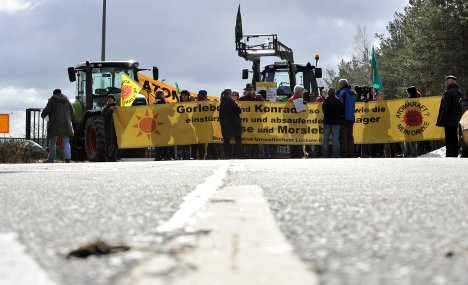 Daily newspaper Die Tageszeitung reported on Tuesday that sources at Röttgen’s ministry said he may take away responsibility for the final disposal of nuclear waste from the BfS by creating another government agency or privatising the process.

The potential change resulted from a conflict between Röttgen and BfS President Wolfram König. Whereas Röttgen on Monday announced the Environment Ministry would end a moratorium on exploring possible storage at the controversial underground site at Gorleben in the sate of Lower Saxony, König has said the site fails to meet international safety standards.

But Röttgen’s move to store more waste at Gorleben, which has been in the news frequently in the last year amid allegations of safety shortcomings and illegal development, has spurred massive protest from environmentalists.

Demonstrators gathered in front of the site on Monday with threats of lawsuits.

“Were these plans to be implemented, then those who produce nuclear waste would also have control of the final storage,” Wolfgang Ehmke, spokesperson for the citizen’s initiative for environmental protection in the district of Lüchow-Dannenberg where Gorleben is located, told Die Tageszeitung.

Meanwhile opposition politicians from the environmentalist Greens and the centre-left Social Democrats (SPD) accused the conservative Christian Democrat of pandering to the nuclear industry lobby.

The criticism came despite the environment minister’s reported intention to conduct an “open” storage process that included input from German residents, and find alternative sites in the event that Gorleben is found to be unsuitable.

On Monday Röttgen’s predecessor at the Environment Ministry, SPD leader Sigmar Gabriel said that going back to Gorleben was irresponsible, comparing the site to another salt dome turned waste depot called Asse, which the BfS recently ruled should close due to serious safety issues.

“The federal government threatens to repeat the same mistakes it made in the past with Asse,” he said.

Asse, located near the town of Wolfenbüttel, was taken over by the BfS from the allegedly careless former proprietor the Helmholtz Zentrum in January 2009. BfS investigation has since revealed disturbing and repeated safety breaches at the site.