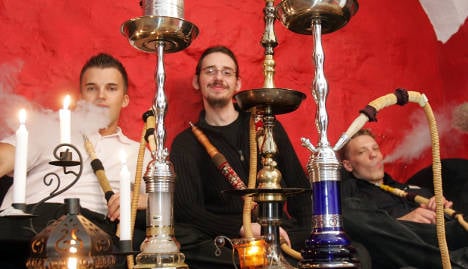 “It is a myth that water pipe smoke is less dangerous because the harmful substances are filtered out. But the opposite is the case,” Peter Lang told a recent conference in Erfurt.

Stern magazine reported this weekend that he said figures showed that one in ten of teenagers in Germany smoke shisha pipes regularly and that use had increased over the last five years or so.

Pupils at grammar schools are said to be using the pipes particularly frequently, as smoking cigarettes has become less socially acceptable.

“But only every second young person knows that water pipe smoke is damaging,” said Lang.

The tobacco in shisha pipes is not set alight and directly inhaled, he explained. Instead the damp tobacco, which is often impregnated with smells such as strawberry and apple, is heated up on charcoal and then sucked through water.

“This means that during smoking, there is not this uncomfortable, scratchy feeling,” he said. “Many believe that therefore smoking from a water pipe is even healthy.”

“Thus, heavy metals like chrome, nickel or lead are sucked more deeply into the lungs,” said Lang. In the long term this increases the danger of lung cancer as well as tumours on the lips and mouth.

“For young people that may seem like a long way away but it is not,” he said.

And it is among younger people that the shisha pipes are increasingly popular – many do not even rate themselves as smokers if they have a water pipe a couple of times a month, although many smoke them more frequently.

“Among 15-year-olds, there are now as many shisha smokers as there are cigarette smokers, around 15 percent,” said Lang.