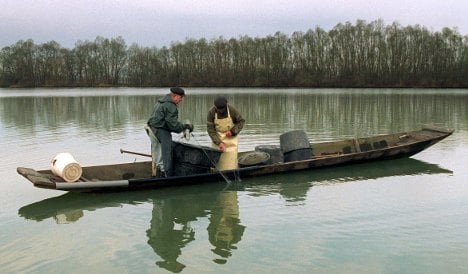 Fishermen at the nearby Taubergießen nature reserve Photo: DPA

The woman is thought to have searched for men to impersonate her husband, dress in his clothes and be made up to look like him for a visit to a law office to sign papers handing control of their finances to her.

The Süddeutsche Zeitung reported that the case, known to Baden-Württemberg police as the ‘diva and the fisherman,’ came to light at the end of last week when the woman was arrested, suspected of fraud and manslaughter.

Yet detectives have no body to show that her husband, named only as Hermann H., is dead.

The 71-year-old fisherman and fish breeder was registered missing at the end of October when a man who rented a flat from him called police to say he had not seen him for several months.

His opera singer wife, who has not been named, was extremely unwilling to help investigating officers at all, the paper reported. A police spokesman said, “During further investigation, the circumstances surrounding the disappearances became increasingly ominous.”

Police conducted repeated searches of the couple’s flat in the small village of Kappel-Grafenhausen, around 40 kilometres north of Freiburg.

While this was going on, the woman went a lawyer’s office with an elderly man who said he was her husband. The lawyer arranged a meeting with the police to demonstrate that Hermann H. was alive and in the best of health.

Detectives who arrived to see the evidence were disappointed though, as the singer failed to show up, saying her husband had suddenly gone on a cruise.

She then visited a notary with a man identifying himself as her husband, and signed papers to give her power of attorney over all his assets.

The doppelgänger has since admitted his role to police, saying he had sat for a make-up artist to work from a photo of the missing man, to make him look as similar as possible, before the trip to the notary.

Investigators are now following around 250 clues to try to unravel what they are convinced is the opera singer’s lengthy concealment of her husband’s death.

She allegedly sought people who would confirm to the authorities they had seen her husband, as well as having approached a number of men to ask them to pose as him for the trip to the notary.

She was arrested last Thursday and is being held in custody, where she has refused to make a statement, the paper said.