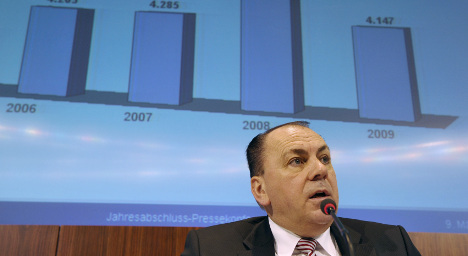 “Any other discussion is a sideshow which will distract from the necessary [fiscal] consolidation,” Weber told the central bank’s annual press conference.

As the global economic slump deepened in 2008, Brussels temporarily eased fiscal rules to allow governments to spend more on support for their struggling economies.

The result was swollen public deficits, increased debt and countries including Greece in such dire straits that financial markets turned on them. That in turn threatened the cohesion and credibility of the entire eurozone.

The current pact for curbing annual deficits and compounded debt levels for EU countries is widely seen as a failure: 20 out of 27 members have breached the deficit limits.

In Germany, Europe’s biggest economy and a staunch defender of fiscal rectitude, leading politicians have floated the idea of an EMF.

Finance Minister Wolfgang Schäuble raised the idea of a new body in comments to a German Sunday newspaper, Welt am Sonntag. Germany has consistently refused to give aid to Greece for fear of sending the wrong signal and encouraging laxity elsewhere.

And on Tuesday German Chancellor Angela Merkel stressed that EMF plans would only work if strengthened “sanctions” were included to penalise wayward spenders.

“There must be sanctions,” she said of plans due to be outlined to the European Commission by the EU’s economic and monetary affairs commissioner Olli Rehn in Strasbourg, France.

According to German media reports, Berlin envisages the enforced suspension of European financial aid as well as the withdrawal of EU decision-making voting rights.

Merkel said plans for an EMF were being formulated to combat “situations of last resort.” They should not be perceived as an instrument that weakened the existing framework, she said.

Royal Bank of Scotland senior European economist Nick Matthews said the European Monetary Union “is at a crossroads, its sustainability will be a function of how fiscal policies are coordinated in the future.”

But some analysts have forecast that tighter rules would involve intrusive oversight of countries’ fiscal management and strict sanctions, two notions that have been strongly resisted in the past.

“There seems to be no other option than removing fiscal sovereignty of member countries,” Matthews warned. “The idea of an EMF should be seen in this context, i.e., as part of a set of ideas currently being discussed to reform EMU institutions,” he added.

The EMF idea goes to the heart of how the eurozone will develop, given efforts by some to make current rules tighter. Others however want politicians to have more influence over monetary policy.

Some economists underscore the danger of allowing EU states to draw comfort from the idea that they can get help in a crisis.

“It would create severe moral hazard,” by relieving pressure on governments because they would count on aid from peers if trouble arose, Barclays Capital economist Thorsten Polleit said.

Polleit also felt it would fuel inflation because the money would come from more government bond issues, which the ECB would be pressured to underwrite at least indirectly by printing more money.

Annunziata said an EMF would simply reproduce the IMF mechanism “under a new acronym – and it would need to be funded, whereas the IMF already is.

“Definitely a step backwards, not forward,” he concluded.

But Deutsche Bank counterpart Gilles Moec said the idea “would go much further than the SGP in creating credible incentives for fiscal discipline.”

Moec said an EMF would require countries with large deficits and debt to pay more into the fund. Beneficiaries would have to meet tough conditions, just as borrowers from the IMF have to, he added.