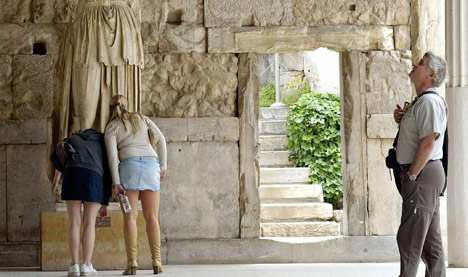 “I won’t mince my words here. I believe that it will have barely any consequence at all,” said Klaus Laepple, introducing the world’s largest travel fair which opens in Berlin on Wednesday. “The holidaymaker is personally hardly affected by these things.”

He acknowledged there could be a slight raise in some prices, due to hikes in sales tax announced by Athens as part of austerity measures but said travellers should book earlier to avoid such increases.

Some 2.3 million Germans went to Greece last year, a drop of just over four percent, their fourth most favoured European destination after Spain (10.1 million), Italy (5.0 million) and Turkey (5.0 million).

In general, however, Laepple painted a gloomy picture for the German tourism industry, with turnover down three percent in 2009 and unlikely to recover this year.

He said 2010 “will be a challenging year but also a year of consolidation and stability. We are cautiously optimistic but we are not euphoric. 2011 could once again be a normal year.” Laepple said that a “dramatic” drop in business travel due to the global economic crisis was to blame for the difficulties.

The sharpest percentage drop in passengers was on the Greek island of Crete which welcomed nearly a third fewer German tourists than the previous year.