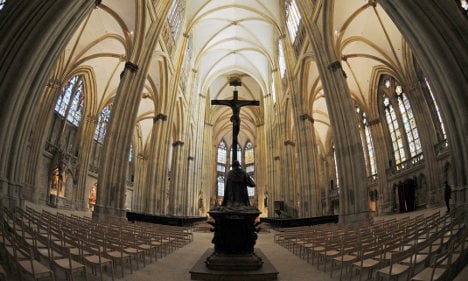 However, the minister’s demand was in sharp contrast to remarks by Stephanie zu Guttenberg, the head of a leading child protection group and wife of Defence Minister Karl-Theodor zu Guttenberg, who called on the state to get tougher on abuse rather than leave it to the Church.

In the strongest intervention yet on the issue by a senior government minister, Leutheusser-Schnarrenberger said compensation would be “piece of justice, even if the injustice suffered cannot be materially compensated for.”

“It needs a clear signal to the victims, for example the conversation about freely given compensation in cases in which the statute of limitations has passed,” she told daily Süddeutsche Zeitung.

The debate follows weeks of revelations about sexual abuse in Catholic schools and other institutions.

The Church could not give the impression that it would only acknowledge cases that no longer could be contested in court because the statute of limitations – beyond which cases cannot be tried in court – had passed, she added.

Leutheusser-Schnarrenberger has shown skepticism, however, towards calls for extending the statute of limitations to 30 years. She doubted whether courts could come to a verdict beyond reasonable doubt after such a long time.

Guttenberg, who is the German president of the anti-abuse group Innocence in Danger, said the state could not leave it to the Church alone to pursue abuse.

“Priests and clergymen are citizens of the Federeral Republic of Germany. And if a citizen here commits a crime, then that must be punished through the institutions of the state,” she told reporters at a fundraising event Monday evening.

To date the cases had been investigated within the Church and in some cases reported by the perpetrators themselves, she said, adding that sexual abuse was not confined to the clergy.

“Everyone who is involved with children has urgently to be trained” to be vigilant against suspected abuse, she said. “And I believe the problem isn’t limited to religious schools.”

She also backed Bavarian Justice Minister Beate Merk’s call for an extension of the statue of limitations period for sexual abuse to 30 years.

“We’ve been recommending that for years,” said Guttenberg.

Chancellor Angela Merkel’s conservative Christian Democrats are also open to such an idea, according to general secretary Hermann Gröhe, who said many victims were not able to confront the trauma they had suffered until many years had passed.

Meanwhile, Merk, who has led calls for the extension of the statute of limitations, added to her demands that the minimum sentence for sexual abuse be raised.

“Every sexual abuse must repeatedly be branded as the crime that is was under earlier law and still is in the understanding of the public,” she told daily Die Welt. ”That means: the minimum sentence must be raised from the present six months to one year.”

The centre-left Social Democrats general secretary, Andrea Nahles, who is herself a practising Catholic, also called on the Church to compensate victims, and directed her appeal also to secular schools such as the Odenwaldschule, which has been caught up in its own abuse scandal.

“Above all, where systematic abuse over long periods was covered up, explanations must be given so that it is not repeated,” she told Süddeutsche Zeitung. She added that a symbolic compensation “would be an appropriate offer to the victims of those times.”