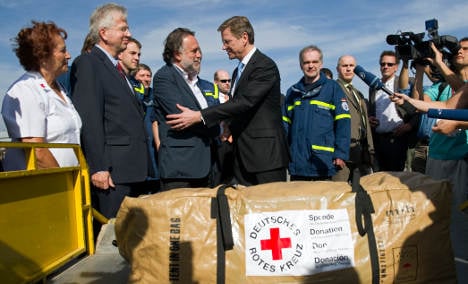 Westerwelle, who was starting a Latin American tour, is the first European minister to visit Chile since the 8.8-quake February 27 and ensuing tsunami, which left hundreds dead.

The assistance, valued by the German foreign ministry at €630,000, includes dialysis machines, drinking water containers, tents and blankets for those left homeless by the massive temblor.

A four-member team from Germany’s THW civil reconstruction service will travel to Concepcion, one of cities worst hit by the catastrophe, and stay for two weeks to help assess building damage.

Part of the aid is also earmarked for churches and other cultural monuments battered in the quake.

Westerwelle presented the relief assistance to his Chilean counterpart, Mariano Fernandez, and later met with the president-elect, tycoon Sebastian Pinera, who will succeed Michelle Bachelet Thursday.

“We of course want to show our solidarity because Germany and Chile historically have very strong ties” dating back to the first wave of German immigrants to Chile in the 1850s, Westerwelle told reporters as he arrived at Santiago airport.

At the time thousands of Germans unhappy with religious tensions at home during German unification efforts emigrated to Chile’s temperate rural center and cooler south, as well as to the United States.

“We want to show that we do not forget our friends in their hour of need,” Westerwelle said.

After talks later at the presidential palace – the foreign ministry suffered damage in the quake – Fernandez thanked Westerwelle for “a further sign of international solidarity” since the national tragedy.

Westerwelle conferred before the trip with US Secretary of State Hillary Clinton, who had brought aid to Chile Tuesday.

Initially reluctant to accept outside help, Bachelet issued an aid appeal as it became clear that the country, long seen as a model of political and economic stability in Latin America, desperately needed assistance.

Officials had said more than 800 people died in the disaster but now say 452 deaths have been confirmed.

Westerwelle added the brief stop in Chile to a long-planned Latin American tour, which will take him to Argentina later Sunday, followed by Uruguay Tuesday and Brazil Wednesday to Friday.