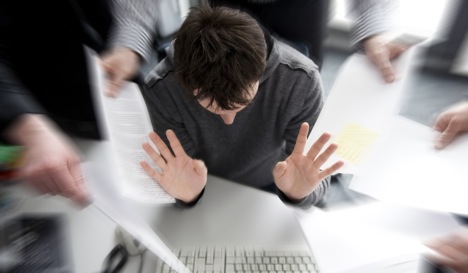 According to a report in Sunday’s edition of the Frankfurter Allgemeine newspaper, a team of expert psychiatrists and health insurance officials recently concluded that exhaustion among employees is increasing.

“The intensity of the burnout syndrome and the frequency with which it occurs are both increasing steadily,” said Frankfurt psychiatrist Hansjörg Becker. He claimed that the situation was so bad that many German businesses were already suffering due to the high number of employees who were forced to miss work due to feelings of mental and nervous exhaustion.

According to the paper, the number of Germans forced to give up their jobs completely because of burnout syndrome has also increased drastically. In 2009 the Allianz health insurance experts calculated that 22.1 percent of all vocational disability cases (incapacity to work) were caused by psychological problems. In 2007 the figure was just 20.5 percent. 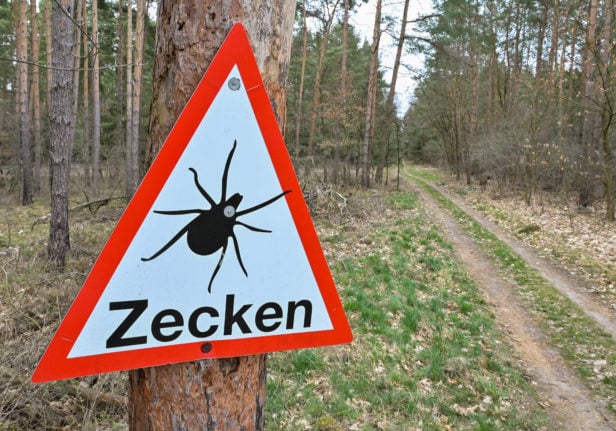 Ticks are tiny, spider-like creatures that are usually between 1mm to 1cm in size. They generally live in long grass, bushes and wooded areas.

These little arachnids don’t fly or jump but climb onto animals or humans as they brush past. They are parasites, and once a tick bites into the skin, it feeds on blood for a few days before dropping off.

During this unpleasant bloodsucking transaction, ticks can transmit diseases to humans which can become dangerous.

The disease which is mostly associated with ticks is Early Summer Meningoencephalitis (TBE) which, in severe cases, can cause permanent damage such as paralysis, or even death. Thanks to the mild winter and increasingly warm temperatures, this disease is on the rise this year in Germany.

The other main disease associated with ticks is Lyme disease which, in the most severe cases, can attack the nervous system, joints, and organs.

What are the symptoms?

Those who develop Lyme disease can get flu-like symptoms a few days or weeks after being bitten by an infected tick. Children might lose their appetite, lack energy, or complain of stomach ache.

But the most obvious sign of Lyme disease is a red circular rash around the bite. 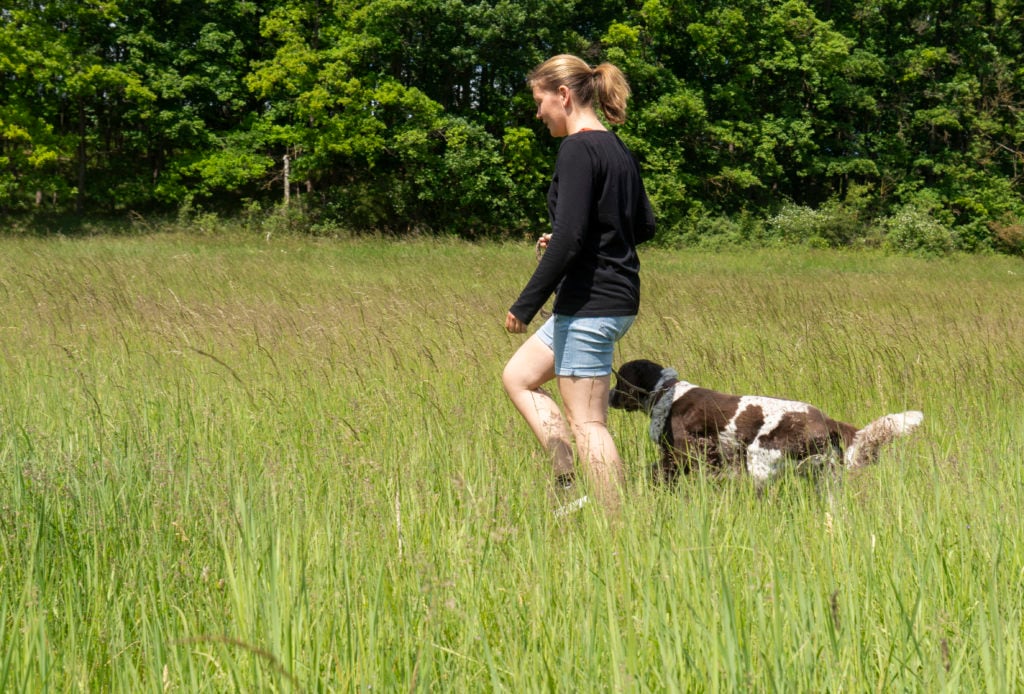 A woman walks her dog through a patch of long grass. Photo: picture alliance/dpa/HUK-COBURG | Hagen Lehmann

However, if you remove the tick in less than twelve hours, you usually have nothing to worry about, as it takes a while for the infection to be passed onto humans.

The situation is different with TBE, however, as the disease is transmitted much faster. But, thankfully, it is also much rarer: according to the Robert Koch Institute (RKI), only 0.1 to 5 percent of ticks in risk areas carry TBE viruses.

Most people infected with TBE don’t have any symptoms, while one in three initially suffers from flu-like symptoms such as fever, headache, and aching limbs. In rare cases, the spinal cord can be affected, with symptoms such as severe headaches and neck pain, nausea, and impaired consciousness.

In the majority of patients, the disease heals completely, but in an average of one percent of cases, it can be fatal.

Luckily, there is a vaccination against TBE, which is recommended for those regularly visiting high-risk areas.

Where am I most likely to get bitten?

Ticks can be found all over Germany – even in city parks. However, TBE infections occur more frequently in so-called TBE risk areas, and the RKI has an updated map of these areas.

These are found in large parts of Bavaria, Baden-Württemberg, and parts of southern Hesse, Saxony, and Thuringia, but there are also isolated risk areas in central Hesse, Rhineland-Palatinate, and Saarland.

In February, the number of TBE risk areas was expanded by the RKI to include five new TBE risk areas in Bavaria, Saxony and Lower Saxony, so that there are now a total of 161 affected districts.

What should I do if I get bitten by a tick?

Firstly, it is unlikely that you will even feel the tick bite, which is why it’s important to check yourself carefully when returning from a trip to the countryside or a risk area.

Ticks tend to bite around thin areas of the skin such as kneecaps, groin, armpits, and hairline. In children, they can often be found on the scalp and behind the ears. 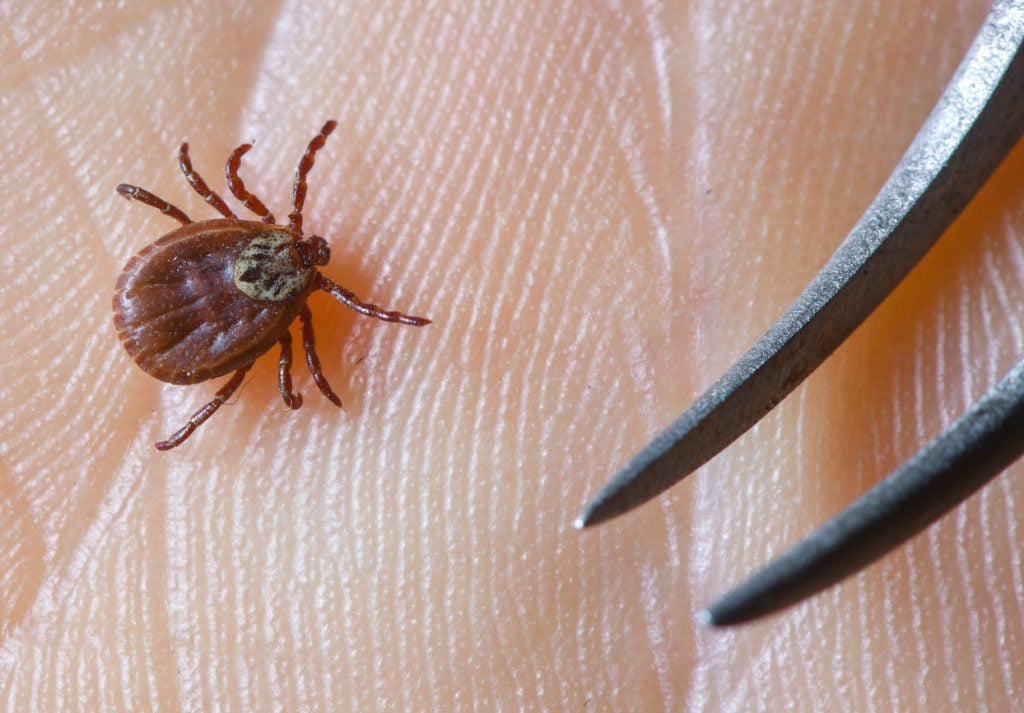 Using tweezers is a good way to pull a tick out of the skin. Photo: picture alliance/dpa/dpa-central picture | Patrick Pleul

If you do find a tick, you should remove it quickly with a special tick remover (available at all pharmacies), tweezers, or your fingernails. The sooner you can do this, the lower the risk the tick will be able to infect you.

The important thing is to make sure you remove the whole tick, by grabbing it as close to the skin as possible and pulling slowly. Then wash and clean the bite, and contact a doctor if you’re worried.

One thing you shouldn’t do is to put oily liquids on the tick, as this could enrage it and cause it to release saliva potentially containing harmful pathogens.

How can I prevent a tick bite?

If you’ll be spending time in wooded areas, long grass, or known risk areas, you should wear long-sleeved tops and full-legged trousers and tuck trousers into socks. Children should also wear a hat, as ticks can climb to their height in bushes.

In short: have as little skin exposed as possible.

It’s also sensible to wear light-coloured clothing so you can easily spot a tick if one bites you.