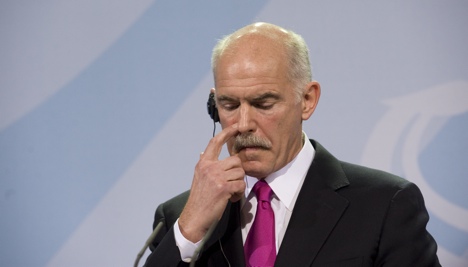 “No one here has to pay thousands of euros in bribes to get a hospital bed. We don’t give pensions to generals’ daughters who can’t find a husband … Taxi drivers give receipts and farmers don’t get billions of euros in EU subsidies for non-existent olive trees,” the newspaper thundered in its Friday edition.

Responding to an earlier suggestion by some German MPs, Papandreou said Friday that Greece did not need to sell some of its uninhabited islands to raise cash and plug its gaping budget deficit.

“I think that more creative solutions exist to tackle the deficit than selling Greek islands,” Papandreou told reporters in Berlin after talks with Chancellor Angela Merkel.

Tensions have been growing between the popular press and some politicians of the two countries as Greece seeks to restore trust in its solvency in the global financial markets. Germany, as Europe’s biggest economy, is seen as first in line for any bailout but any such move would be deeply unpopular with voters.

Merkel said on Friday that “everything to do with negative emotions is unhelpful. We should find other solutions to our problems.”