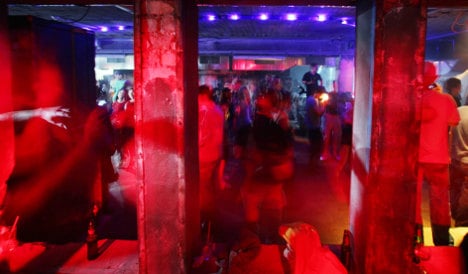 Techno was declared ‘dead’ by the turn of the century; the 1990s euphoria of the post-unification Berlin scene had lost steam. But with his highly acclaimed 2009 book “Lost and Sound: Berlin, Techno und der easyJet set,” German music journalist Tobias Rapp wanted to show the world that techno and club culture were still alive and kicking in Berlin – Europe’s new capital of clubbing, as exemplified by the endless minimal techno sessions that go well into Sunday and Monday at the likes of Berghain and Bar 25.

This compelling homage to the Berlin sound of the noughties and the city’s ever-evolving culture of clubs, labels and easyJet tourists was initially published by the prestigious Suhrkamp Verlag. Now, in a rather unconventional move, the Berlin-based techno label Innervisions is putting out an English edition. It makes sense: after all, many of the people involved – the DJs, the clubbers, the producers – hardly speak any German.

How did you first make the connection between easyJet and Berlin nightlife?

Around 2003, while I was standing in queues waiting to get into clubs, I began to notice that more and more people were speaking all kinds of different languages: they were coming from somewhere else. It was at about that time that a lot of low-cost airlines started flying to Berlin. I estimate about 10,000 people fly to Berlin every weekend just to go clubbing. The good thing about easyJet is that it’s like a cab… as if Milan or Birmingham were suburbs of Berlin, and the other way around. That’s the great thing about it that made this scene possible. And the thing about the easyJet set is that if fuel gets more expensive, then it’s over.

There is so much nightlife here – so many different clubs – that you can hear everything from heavy metal to folk, Balkan beats to Britpop every weekend. What’s unique about the techno scene?

I think it’s better here than anywhere else. Berlin is a techno city. It’s not a heavy metal or folk city. In New York, jazz and hip hop and Latin music communicate the reality of the place. I lived in New York in the early noughties, and what I really liked was the way that hip hop communicated within the city. In London, you have similar things with all the pirate radio stations and all the different music styles that are communicated this way. Coming back to Berlin, I realised that we have that too, but it’s techno here.

In the book, you describe how Detroit techno came over here in the early 1990s and was developed in places like Tresor into this pounding music that was a kind of celebration of reunification. There were a lot of East Germans involved, and by the late 1990s, it had burned out. The Love Parade had become huge, then lost steam and moved to another city (Dortmund). But the flame of Berlin techno was kept alive by a few clubs. Everyone thought Peaches and electroclash were going to be big and that techno was over. But by 2003 or 2004, it somehow re-exploded. How did that happen?

In the 1990s, techno was a typical pop-cultural movement. Everyone wants to participate when it’s growing, but when it stops growing, it collapses very quickly because the growth was the most important thing about it. If you look at who runs the clubs now, most of them were already around in the 1990s. They learned from their mistakes. Nobody believes in the “raving society” anymore – that was the catchphrase from the 1990s: the illusion that everyone was going to be a raver.

That’s an interesting question. In the East German techno scene, you have two developments. You have partying to techno music as a sort of mainstream social behaviour – lots of people accept this as a leisure time activity. The underground thing is the artistic content. In the 1990s, you had techno in the charts… That’s over: the music has become very underground. There aren’t as many record stores, and not as many people care about the music. That’s why the DJs are so important – they are the mediators between lots of people who want to go out and the very few people who are interested in the music. DJs are the ones who have to communicate this music to a mainstream audience. And, amazingly, it works.

How long can minimal techno remain the dominant style?

Forever! No, really – I can’t answer that. It’s a type of music that is very simple but at the same time has infinite possibilities. It’s like a haiku. It’s a very simple form, but you can fill it with an endless number of sounds. Let’s put it this way: I’m not seeing young people coming up with something categorically different. That was our aim in the early 1990s, but it was an illusion. Techno was the child of disco music, so it wasn’t new, but it felt new. And we felt we wanted to have it because we didn’t like the other stuff. ‘Fuck off, guitars, we don’t want you!’ – I’m not seeing that anywhere now. Maybe it’s over, this idea of revolutionising pop culture through the murder of the father; maybe it doesn’t work anymore. I feel a little lost when I start to think about the future, because I have just started to understand the present. It’s very difficult to realize what it means to have access to all the music that exists on the internet.

You also write about Ableton, the Berlin music software company that grew out of the techno scene. With Ableton Live, you can play music on your laptop with practically every sound known to man. Do you think this is actually going to kill off creativity in the long run?

I don’t think so. I’m an optimist. Why should creativity end now after thousands of years of world history? The tools are changing. I think humans always find new ways of connecting their subjectivity to the new tools. When I grew up, I learned to think in genres and epochs and all these things have just disappeared into one platform. It’s all there. And the fact that it’s all there isn’t new anymore. The territory is charted. I haven’t seen the rocket that is going to take us to the next level of music.

What about the future of Berlin as a location for this culture? Is the Club-Meile along the Spree really threatened by gentrification and development?

Some clubs are and some are not. The big clubs like Berghain, Watergate and Weekend all have long-running contracts. They have invested a lot of money. They are going to be there in five, 10 years’ time. I have already twice witnessed everyone saying, ‘Ah, now it’s over.’ And it never was. It was over in one part of the city and moved to another part. I think the city of Berlin still has enough spaces and enough empty buildings to maintain an interesting nightlife. The people who know how to make a great club out of a building, they’re there – that’s what’s important.

You stress in the book how important the club scene is for Berlin’s economy. Do you reallythink the government is aware of its significance?

It’s a double-edged sword. On the one hand, it’s good that the government cares about the club scene a little bit. It doesn’t see it as an enemy as most other city governments do. On the other hand, I don’t know what the club scene has to gain now that the government has discovered the attractiveness of its nightlife. There are some embraces that can choke you. I was at a conference last fall organised by Berlin Tourism Marketing and I had the feeling that, in a way, my book scripted the marketing campaign for them.

Do you want to be part of that?

No, I felt very uncomfortable in that kind of situation. If the city comes along and starts to treat club culture like ‘culture,’ then the problems begin. I think it’s a good thing if the Senat for economy deals with clubs, not the department of culture. If the city comes up with a worldwide marketing campaign that says, ‘Hey everybody, the nightlife is so great,’ then at a certain point Berliners’ hatred of tourists will be justified. The good thing about the tourists that come now is that they really come because they care about it. Most of them have more knowledge of techno culture than the Berliners do. These people are always welcome. But if people come because of a certain image of the city and everything has to be explained to them, then the club scene will suffer. That’s the danger.

In the book, there is a chapter about a 39-year-old woman who is still a passionate clubber; her 19-year-old daughter had a pretty unconventional upbringing. Why did you include that part?

She’s a good friend of mine. I included it because I wanted to show that this whole techno scene is about the way we live. It’s very controversial: I’ve had lots of conversations about it. But the people who continue clubbing and don’t stop are a reality. I’m 38, too. You have to adjust it to the rest of your life – your job, your family. But it’s still part of your life.

Tobias Rapp moved from Bremen to Berlin to study in the early 1990s. He squatted, DJed and began writing about pop and club culture, before finally becoming the music editor of the left-wing daily newspapertaz. For the past year, Rapp has worked in Hamburg as “pop editor” at news magazine Der Spiegel. On weekends, he returns to Berlin to go clubbing.

Rapp will be discussing his book, “Lost and Sound: Berlin, Techno and the easyJet Set “(Innervisions, 2010) at a special EXBERLINER reading at Kim Bar (Brunnenstr. 10, Mitte, U-Bhf Rosenthaler Platz) on Thursday, March 11, at 21.00.