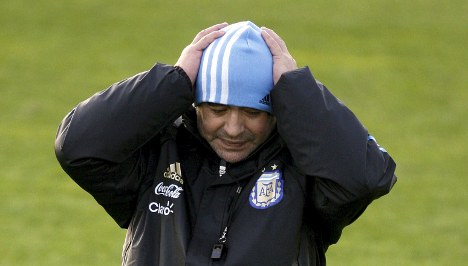 Ninety-nine days before the World Cup starts in South Africa, the clash finds the flamboyant “El Diez” under pressure after the 1978 and 1986 winners came within a whisker of not qualifying for the tournament for first time in 40 years.

“If it was up to Argentinian journalists we should come last in the World Cup,” said Maradona upon arrival in the Bavarian capital. “But the people are behind us.”

The Albiceleste eventually made it though thanks to a goal in the dying minutes against Uruguay in Montevideo, and Argentina’s greatest-ever footballer has found that coaching the national side is not as easy as playing for it.

Since taking over as coach in late 2008 the team has been woefully inconsistent, while his suggestion to journalists in October to “suck it and keep sucking it” earned him a two-month ban from Fifa, football’s governing body.

Argentina, drawn against Nigeria, South Korea and Greece in the World Cup, has won its last two friendlies, beating Costa Rica 3-2 and Jamaica 2-1, but Maradona has offered few clues on the makeup of the final team.

He has used around 100 different players, and with only the Germany game and two possible fixtures against Canada and Israel in May before the World Cup, time is running short.

“All the players are being tested,” Maradona said. “The ones who are not in this list have the same opportunities. I already phoned the 50 per cent of the players who will play the World Cup.”

Germany, by contrast, in Group D with Ghana, Serbia and Australia, have been the model of cool efficiency, finishing top of their qualifying group unbeaten, with eight wins out of 10 including two over a fancied Russian side.

Coach Joachim Löw has brought just two new players into his 26-man squad, Bayern Munich and Bayer Leverkusen midfielders Thomas Müller and Toni Kroos, in what will be Germany’s final match before the final choice is made.

With worries about firepower up front, Miroslav Klose and Mario Gomez being out of sorts of late, Löw may turn to Brazilian-born Cacau, who has scored seven goals in his last three matches.

“We can’t afford to make lots of mistakes. There are hardly any teams that

are as aggressive and as attacking as Argentina,” Löw said.

fit and raring to go.

“They have the full repertoire, that’s what makes them so dangerous – but also interesting,” the 33-year-old Ballack said. “We are going to face a team that is absolutely top class, if you look at the individual players.”