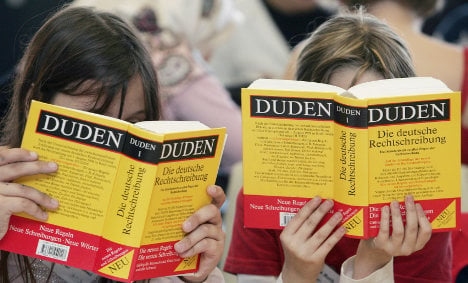 But this is in fact Potsdamer Platz, in the very heart of Berlin, the scene for the launch of a new campaign on Thursday to protect and promote German, a move seen as a backlash against the growing use of English.

Spearheading the campaign – entitled “German, the language of ideas” – was Foreign Minister Guido Westerwelle, who found himself in hot water when he refused to speak English at his first press conference after being elected.

“I am not ashamed of the German language. It is wonderful,” Westerwelle told foreign reporters recently.

He added: “German is the most spoken language in Europe. It is the native language of over 100 million people,” spoken in Germany, Austria, Switzerland and some parts of the Netherlands, Belgium and Luxembourg.

Westerwelle’s campaign is being viewed as a reaction against the growing dominance of English in a country proud of its linguistic and literary heritage.

It can claim Goethe, the author of Faust; the poet and philosopher Schiller; and more recently Bertolt Brecht and Günther Grass.

Last July, the new version of the iconic Duden dictionary, the guardian of the language, came out with 5,000 new words.

But many were taken straight from English.

Germans can now officially have “der Babyblues” and go to “eine After-Show-Party” – hoping it is not “eine No-Go Area.” “Der Nickname” and “Das It-Girl” are other words that crept into this year’s edition.

In the corporate world, many German firms insist their executives speak English in meetings, even when held in Germany.

English is even making inroads into the German legal world.

Although it is enshrined in the German constitution that “the court language shall be German,” a pilot scheme near Cologne is allowing corporate cases to be heard in English.

The increasing use of English prompted Erika Steinbach, a member of parliament, to fire off a furious press release.

“Millions of Germans are going through life having to guess rather than really knowing what is going on, because products, adverts and instructions are in a foreign language,” she said.

The Association for the German Language (VDS) welcomed Westerwelle’s crusade.

“It’s high time, because English is taking over several tasks that used to be done in German,” Holger Klatte, a VDS spokesman, said.

“This is shown in the fact that there are so many foreign English words in Germany – more than in other European languages.”

Cynics might suggest that Westerwelle – uncharitably rechristened “Mr Westerwave the outside minister”, a literal translation of his name and title into English – has a personal interest in promoting German.

His refusal to speak English and his invitation to the BBC journalist who posed the question to “take a nice cup of tea” sparked a vicious bout of mockery in the press and on the web about his language skills.

But it is not just politicians who are fighting the omnipresence of English in Germany.

Deutsche Bahn (DB), the national railway company, has announced it is

dropping some of its English-language marketing terms after passengers complained they could not understand them.

Soaring high above Potsdamer Platz, among the billboards – in English – advertising international companies, is the iconic Deutsche Bahn building, dominating the skyline with its red DB logo.

On the side of the building, in plain English, is the welcome sign.