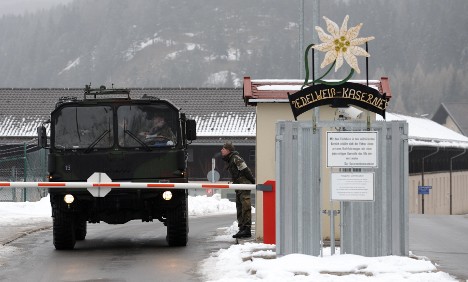 The Mittenwald mountain infantry base, where the scandal erupted. Photo: DPA

Rheinhold Robbe this week presented the parliamentary defence committee, the Defence Ministry, and army commanders with 23 letters from soldiers that detail ritual abuse over the last few decades across the different branches of the country’s military.

Initial reports about hazing at the Mittenwald mountain infantry unit in Bavaria emerged in early February after a young man who trained there came forward to describe humiliating rituals during which soldiers were forced to eat raw animal liver until they vomited and nude climbing exercises.

“We can only achieve clarification and improvement for the situation when there’s a start at uncovering what actually happened,” Robbe told broadcaster N24 on Tuesday. “And the goal must be not to just to stop it but prevent it from happening in the future.”

Robbe, who is scheduled to speak to the committee on Wedesday, also acknowledged that the hazing rituals had occurred “everywhere in the Bundeswehr.”

The Bundeswehr has launched an investigation into the Mittenwald matter, which Robbe said had garnered more than 50 additional letters from soldiers who experienced hazing there.

The treatment was supposed to be a rite of passage for soldiers to climb the internal hierarchy within units.

Among other letters describing abuse beyond Mittenwald, one was titled, “Mittenwald is only the tip of the iceberg,” and described how alcohol consumption was “practically ordered” during group social events.

Another letter penned by an enlisted man between 1996 and 1998 at various southern German stations detailed a game called “Jukebox,” during which young soldiers were shut into their footlockers and forced to sing.

Still another soldier who served as a naval officer two decades ago described something he called the “red-arse ritual,” where young recruits had an electric floor polisher applied to their bare backsides until their skin was raw.