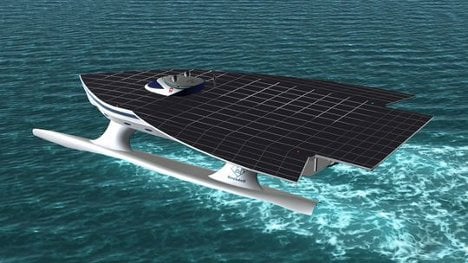 According to the boat’s manufacturer PlanetSolar, the catamaran-style yacht covered with 500 square metres of solar panels is undergoing final touches at the Knierim Yachtbau shipyard in Kiel before its official unveiling on February 25.

PlanetSolar’s website claims their boat is the largest solar vessel in the world at 30 by 16 metres, but more impressive is the ship’s futuristic aesthetic and “wave piercing” technology that allows it to travel smoothly even in bad weather.

Weather permitting, the boat’s first splash-down for tests will begin in late March, followed by a special public appearance at the Hamburg port’s 821st birthday celebration on May 7-9.

In 2011, the PlanetSolar boat will then take a 40,000-kilometre voyage for an estimated 140 days. The two-man crew will route the ship close to the equator for maximum sunlight at an average speed of eight knots, heading through the Panama Canal, across the Pacific and Indian oceans and through the Suez Canal, after which it will return to the Mediterranean.

PlanetSolar hopes to make the first solar-powered trip around the world to increase awareness about harnessing renewable energy, the company says.

There are plenty of solar-powered vessels already on the market, but PlanetSolar’s yacht has a much more powerful lithium ion battery, allowing it to keep moving for three days and nights even without any sunshine to recharge, according to weekly newspaper Die Zeit on Monday.

“The ship costs an amount reaching the higher single-digit millions,” head of the shipyard project Steffen Müller told the paper.

While the paper pointed out that sailing is an obviously cheaper and even more environmentally means of water travel, it explained the main purpose of the project is to highlight that solar travel on this scale is possible – no matter the cost.