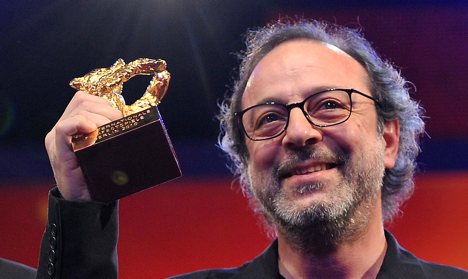 Polanski, 76, missed the world premiere of his film at the Berlinale, the first major international cinema showcase of the year, due to his house arrest in Switzerland where he is fighting extradition to the United States over a 1977 case of sex with a 13-year-old girl.

The Silver Bear trophy was accepted by a producer of the film, Alain Sarde, at a gala ceremony late Saturday. “I am sure Roman will be very happy,” he said.

“However, when I was lamenting with him that he cannot be with us, he said to me, ‘Even if I could, I wouldn’t because the last time I went to a festival to get a prize, I ended up in jail’,” he quipped.

Sarde was referring to the director’s arrest in September on a US warrant when he went to Zurich to accept an award. Polanski finished work on “The Ghost Writer” in his Swiss chalet.

“Whatever the reasons for the jury’s decision, the Silver Bear for Polanski will likely be seen as a signal of solidarity with the director,” it added.

Germany’s Welt am Sonntag newspaper called the award a “political signal” on behalf of the beleaguered director.

The haunting picture, a Turkish-German co-production, tells the story of a struggling pupil whose father dies in a freak accident. It was one of 20 international contenders.

“Honey” is the third in a trilogy by director Semih Kaplanoglu, 46, tracing the life of Yusuf and his development as an artist and human being in rural Turkey, played here by Bora Altas, now aged eight.

Kaplanoglu thanked the festival for the honours – the first Golden Bear for a Turkish film since 1964 – and called attention to Turkey’s threatened wilderness near the Black Sea coast, the setting for much of the film.

“I hope with this prize we have received this evening, we manage to protect the environment there as well,” he said.

The runner-up jury prize went to Romania’s “If I Want to Whistle, I Whistle” the debut feature of 35-year-old Florin Serban set in a grim youth prison and featuring a cast full of amateurs.

The stars of the Russian Arctic drama “How I Ended This Summer”, Grigory Dobrygin and Sergei Puskepalis, shared the Silver Bear for best actor.

The Chinese drama “Apart Together” about a Taiwanese veteran who reunites with the love of his life on the mainland after more than 50 years of separation captured best screenplay.

Last year’s Golden Bear winner, “The Milk of Sorrow” from Peru, has been nominated for an Oscar for best foreign-language film.