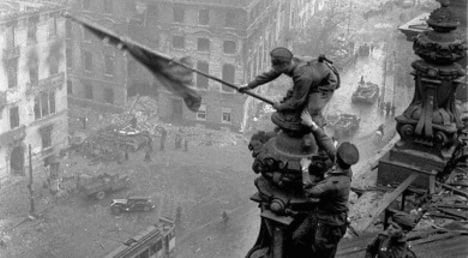 Abdulkhakim Ismailov died on Tuesday in his home town of Khasayvurt in Russia’s southern Dagestan region, the local government announced in a statement on its website.

“His enormous life experience and services to the Motherland will remain forever in the memory of today’s and tomorrow’s generations,” it said.

Ismailov took part in the pivotal 1942-43 battle of Stalingrad and fought all the way to Berlin, which Soviet forces stormed in April 1945, leading to the surrender of Nazi Germany days later.

He went down in history, however, for being one of the three Soviet soldiers shown in a photograph by TASS photojournalist Yevgeny Khaldei showing the hammer-and-sickle banner being raised over the Reichstag.

The photograph was staged for propaganda purposes and shot after Red Army soldiers had already captured the building, but it nonetheless became an iconic symbol of the Soviet Union’s triumphant victory over Nazi Germany.

It has often been compared to the similarly iconic 1945 photograph of US soldiers raising the flag during the battle of Iwo Jima.

When photographer Khaldei developed the negatives, he realized that one of the three Soviet soldiers on the roof was wearing two watches, one on each wrist – a clear sign of looting which did not fit with the heroic image of the army.

He scratched the second watch from the negative and it was printed a week later in an illustrated magazine.

Khaldei also added more clouds of smoke in the background and even substituted the original flag with a large one filled with wind.