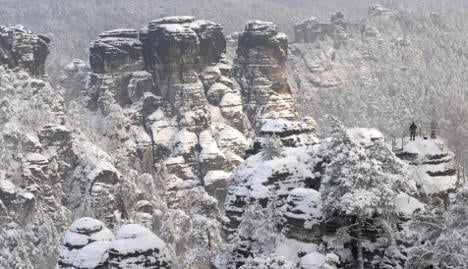 A file photo of the region after snow in early February. Photo: DPA

It remains unclear how many people were on board the Cessna Citation 550 when it went down on Sunday evening. But the plane can carry up to eight passengers.

“We assume it was two pilots, but can’t rule out other passengers,” a police spokesperson said.

The aircraft began its journey in Prague on the way to Sweden, but crashed in Germany near the Czech border in the mountainous region known as Saxon Switzerland. It disappeared from radar screens around 8:20 pm, and is believed to have suddenly lost altitude near the region’s highest peak, a table mesa known as the Großer Zschirnstein.

While a helicopter was able to locate the first piece of wreckage around midnight, recovery efforts did not begin in earnest until Monday morning due to the difficult and craggy terrain near the crash site, police said.

According to Czech police working with German authorities, there were two Czech men on board, but there has been no confirmation from the country’s aviation authority – and German officials have found Czech and Slovakian papers.

It remains unclear, however, whether these actually belong to those on board.