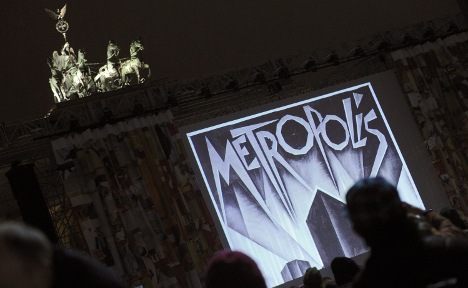 Fritz Lang’s vision of a futuristic urban society – fully restored, except for a few minutes, to its original state – was beamed onto a huge screen at the historic Brandenburg Gate.

“I’m not a film-maker, but he (Lang) could see something that even now most of us can’t see,” said an overawed Sandra Smith, a British resident of Berlin braving sub-zero temperatures with a few hundred others to watch.

And as “Metropolis” is silent, an orchestra performed Gottfried Huppertz’s score at a simultaneous gala screening in a theatre across town, re-creating Berliners’ experience of eight decades earlier.

The Staatsorchester Braunschweig under the direction of Helmut Imig did the same at Frankfurt’s Alte Oper opera house, with Franco-German TV channel Arte providing live coverage from the capital.

“Just about no other German film has inspired and influenced film history as greatly,” said Dieter Kosslick, head of the Berlin Film Festival, of which “Metropolis” is a highlight.

“We are especially pleased and honoured to be able to present the reconstructed original cut of this legendary and seminal film classic at the festival’s 60th anniversary.”

Frank Strobel, conductor of the Berlin Radio Symphony Orchestra, said providing music for silent films was a lost art from a bygone era. In 1927 Berlin alone had more than 30 film theatres with 50-strong orchestras.

“There is no technical help, I don’t have a clock on my monitor … It is the film that gives me the rhythm, the film gives me the tempo, how the actors move in the picture, how they turn around, how a door closes,” he said.

At the time the most expensive movie ever made, Lang’s two-and-half-hour vision of a 21st century dystopia was a flop when it first came out, panned by critics and movie goers alike despite his ground-breaking techniques.

It is set in a teeming, towering city of the future where a downtrodden working class slaves away on immense machines while the sons of the rich idle away their time in luxury and decadence.

But the son of the city’s boss rebels and falls in love with a proletarian prophet, while a scientist called Rotwang causes mischief with a Frankenstein-like Maschinenmensch (“machine person”).

Science fiction writer H. G. Wells said at the time it gave “in one eddying concentration almost every possible foolishness, cliche, platitude, and muddlement about mechanical progress and progress in general served up with a sauce of sentimentality that is all its own.”

It was the first film to be recognised as belonging to the UNESCO World Documentary Heritage.

After its initial flop, a quarter of the film ended up on the cutting room floor in an attempt to make it more palatable, but the shorter version, which made the already complicated plot more confusing, also bombed.

Sections that were cut were thought gone for good, and in 2002 a remastered version came out restoring the full story with additional title cards explaining to viewers the missing action.

But luckily for posterity, it turned out that an Argentinian film distributor had taken the film back to Buenos Aires after its 1927 premier.

An almost complete copy turned up there two years ago which has now been used for a full restoration.

“This is a day of joy,” said Eberhard Junkersdorf, head of the Friedrich Wilhelm Murnau Foundation which carried out the painstaking work. “This is a belated present from Lang.”