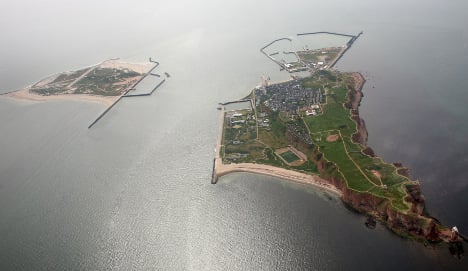 The island of Helgoland. Photo: DPA

Experts have decided that removing the artillery shells would be more dangerous than allowing them to remain at the bottom of the ocean, the state’s Deputy Interior Minister Volker Dornquast said.

He said the shells, which are full of toxic nerve agent tabun, would likely explode from the change in pressure if they surface and suggested a fishing ban and a reduction of naval exercises in the area instead.

“It sounds paradoxical, but the grenades would be really dangerous if we tried to remove them,” he said.

The British military apparently ordered that the weapons be sunk some four kilometres south of the island in 1949. They now lie between 45 and 55 metres below the surface and contain almost 12 tonnes of tabun.

Some 60 years after the end of World War II they are said to be in “problematic state,” but pose no concrete danger if they remain in the water, Dornquast said. Experts believe that most of the tabun, which is water soluble, has likely washed out of the grenades over the years, he added.