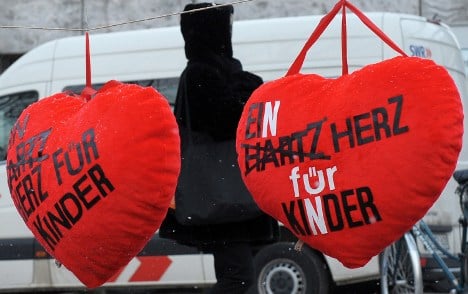 The Constitutional Court in Karlsruhe ruled that the payments allotted for 1.7 million children of people on long-term unemployment benefits, introduced in 2005, were not correctly calculated.

Senior government figures quickly promised a review of the system but refused to guarantee payments to children would be raised.

The rate of the payments should be based on whether or not they are sufficient to live according to minimum humane standards, said Hans-Jürgen Papier, the court’s chief justice. But this criterion had not been used.

Therefore, lawmakers had to revise the basis for the payment system by December 31, 2010, the court ruled. The present payments would remain in effect until then.

However, in an important distinction, the court stressed that the payments themselves were “not obviously inadequate” and therefore lawmakers were not obliged to immediately raise them.

The court decided it did not have the authority to set the rate at which Hartz IV should be paid, saying that this was rather the domain of lawmakers.

German Labour Minister Ursula von der Leyen described the ruling as a “very important decision for the government and for the community,” while refusing to say whether the rate of payments for children would be raised.

It would be “reckless to speculate right now about amounts,” she said.

The decision was in part an indictment on the Hartz IV scheme “but the big winners are children,” von der Leyen said.

The conservative Christian Democrats parliamentary chief, Volker Kauder, vowed a quick reassessment. Kauder told reporters in Berlin a new system had to be determined quickly for children affected. But he also refused to commit to a boost to payments.

The Hartz IV reforms, introduced by the former coalition of the centre-left Social Democrats and environmentalist Greens under then Chancellor Gerhard Schröder, consolidated welfare payments into one system for the long-term unemployed and their children, effectively slashing the payments for many recipients.

The court was ruling on previous decisions made by the Federal Social Court and State Social Court in the state of Hesse, to whom families on Hartz IV had lodged claims. Both of these courts had ruled the system was not adequate to ensure the needs of children.

The payments for children are effectively calculated as a percentage of the €359 per month given to unemployed adults – not including rent, which is covered by the government. If the adult lives with a partner, he or she receives 90 percent of that sum, or €323.