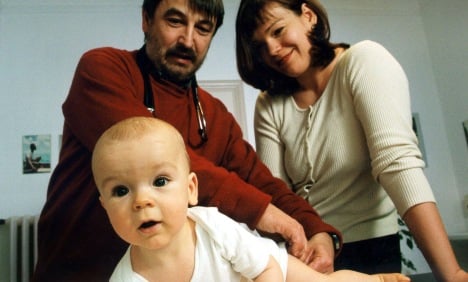 “Particularly dangerous for infants are the Hib infections and whooping cough, which can cause difficult complications leading to death,” president of the BVKJ professional association of paediatricians Wolfram Hartmann said.

According to reports in the German media over the weekend, there is a shortage of two multi-vaccine treatments for infants at British pharmaceutical company Glaxosmithkline, a problem the company blamed on the accelerated production of its swine flu vaccine Pandemrix. All three vaccines apparently require the same packaging facilities.

“We can’t accept that the well-being of children is threatened because a pharmaceutical company decides on the production of a more lucrative vaccine for economic reasons,” Hartmann said, explaining that a stable birthrate of 670,000 to 680,000 children in Germany each year makes the need clearly calculable.

“One knows in advance exactly how much is necessary,” he went on.

“They were informed at such short notice there was not time to hoard supplies,” Hartmann explained, adding that many practices are now without vaccines to offer their tiny patients.

Meanwhile the Paul Ehrlich Institute, which manages vaccines for the government, suggested several alternatives for the missing vaccines, such getting parents vaccinated for whooping cough to protect their children from possible infection.

The first set of scarce vaccines, usually administered in the eighth week, includes protection against six ailments: diphtheria, tetanus, polio, whooping cough (also known as Pertussis), Haemophilus influenzae type B (known as “Hib”), and Hepatitis B. It won’t be available to German doctors again until late February. The Paul Ehrlich Institute said doctors could substitute another that includes five of the vaccines and then add a separate Hepatitis B shot.

The second vaccine combination covers four illnesses in the eleventh month: Mumps, measles, chicken pox, and rubella. This won’t be available until March, but the Paul Ehrlich Institute said that this jab could also be substituted by doctors.