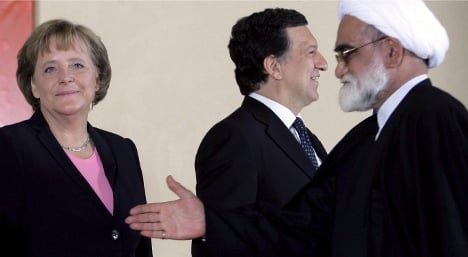 Merkel at a meeting with religious leaders in Brussels. Photo: DPA

The chairman of the Turkish Community in Germany (TGD), Kenan Kolat, warned young migrants urgently needed a stronger “sense of belonging” and offered to arrange a landmark event for migrants that Merkel could attend.

He made a similar offer two years ago after the visit to Germany by Turkish Prime Minister Recep Tayyip Erdogan, but nothing has come of it.

“People need a sense of being at home – and to feel included,” Kolat said.

Erdogan won accolades from his visit to Germany two years ago because he came as “someone who cared” and told Germany’s Turkish community that he was here for them, Kolat said.

Though Erdogan was criticised in some quarters for appealing directly to the Turkish community – seen as interference in Germany’s affairs – Kolat said it merely showed the “weakness of integration policy in Germany.”

“I’d wished myself that the Chancellor could have given such a performance,” he said.

“When I read the commentary on internet forums about statements by myself or other migrants, there is sometimes a clear fury that frightens me.”

Islamic Council chairman, Ali Kizilkaya, joined the call, saying a greater involvement from the Chancellor was needed, especially after high-profile issues such as the debate on banning minarets had shaken up the Muslim community.

Kizilkaya said many Muslims felt unsettled by the minaret-ban debate that happened in Germany after Switzerland voted in a referendum to ban construction of the distinctive towers that form a key part of a mosque. It would be a powerful gesture if Merkel were to play a stronger role in countering prejudice, he said.

Merkel has faced widespread criticism since her re-election in September of being too distant and too quiet on matters of national importance.

She held an “integration summit” in 2007, though most commentators considered it a failure, partly because many immigrant groups boycotted the meeting.