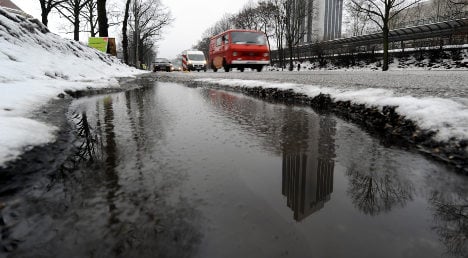 Seven kilometres of the southbound A1 motorway in Schleswig-Holstein, which runs north to south across the western half of Germany, have been so badly damaged by frost and snow that it has been closed indefinitely. Holes up to a half-metre wide have reportedly opened up all over the road.

The ADAC auto club estimated that up to 10,000 potholes had appeared on Hamburg’s streets as frost thawed following warmer temperatures in recent days.

Click here for photos of winter’s icy grip on Germany.

In the state of North Rhine-Westphalia damaged streets have been closed and speed limits lowered. There are also reports from state road officials that there are 15 significant stretches of autobahns with severe damage.

Meanwhile the ADAC estimated that repairs for Hamburg and Schleswig-Holstein would reach into the tens of millions of euros.

“We’re falling back to a time like 50 years ago,” Ferdinand Dudenhöffer director of the University of Duisburg’s Centre of Automotive Research, told daily Bild, warning that the danger of accidents would increase accordingly.

Despite warmer temperatures this week, icy streets continue to pose a threat to drivers in addition to new street damage. A shortage of road salt across the country means that street maintenance authorities have not been able to tend to many areas, and on Friday the state of Lower Saxony went as far as recommending that drivers stay home over the weekend.

Maintenance workers will have their work cut out for them next week if weather forecasts hold. After a weekend of puddle-inducing temperatures, freezing temperatures will return by mid-week, the German Weather Service (DWD) reported on Friday.