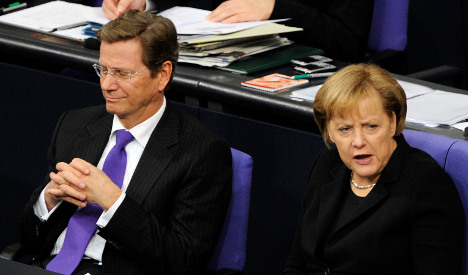 “We’re very much on track,” Merkel told public broadcaster ARD, explaining that the legislative period was not to be likened with a 100-metre sprint, but an 8,000-metre race.

The chancellor admitted that the new coalition between her conservative Christian Democrats and the pro-business Free Democrats had made controversial decisions, but said they had helped reduce pressure on middle class families and businesses.

“In my opinion this is exactly what will bring us out of the valley of the crisis again,” she told ARD.

Families and medium-sized businesses have been helped significantly during the first 100 days, he told broadcaster Deutschlandfunk on Friday morning.

“That there will be a headwind is something we have to live with,” he said, adding that it was inappropriate for the opposition to say the coalition had legislated on behalf of special interest groups.

The foreign minister also said it would be impossible to correct in 100 days what “has gone wrong for 11 years.”

But on Thursday the opposition said the coalition had made a false start.

“This coalition will fail,” he said, adding it was lacking “decision-making power.”

Leader of the environmentalist Greens Cem Özdemir said on Thursday that the first 100 days had been “without course or compass,” adding the coalition had bowed to interest groups.

Deputy head of the socialist Left party parliamentary group Gesine Lötzsch said: “It surprised me that this wedding of love very quickly developed into a problem marriage.”

Meanwhile public opinion of the coalition continues to fall.

According to a poll released by television broadcaster N24 on Friday, some 65 percent of participants said they were unhappy with the new government. Just 24 percent said they thought the Christian Democrats and the Free Democrats were doing a good job. This rating was significantly more negative than polls taken after the first 100 days of the previous legislative period, N24 said.